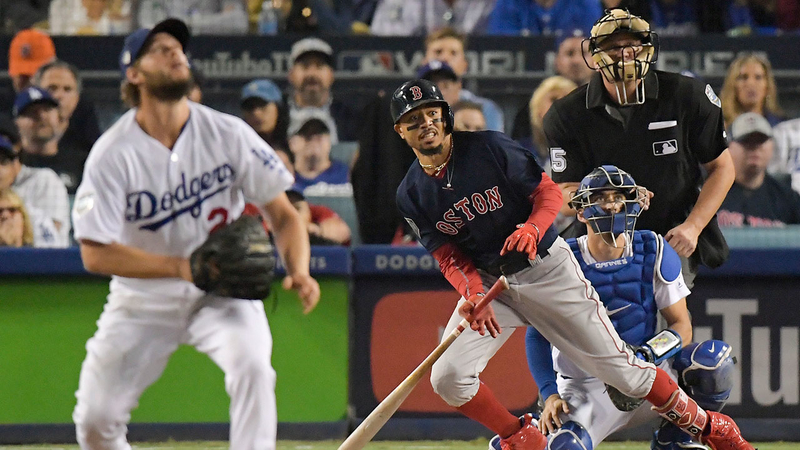 LOS ANGELES (KABC) -- The Boston Red Sox are the 2018 World Series champions after a 5-1 victory in Game 5 over the Los Angeles Dodgers.

The game before 54,367 at Dodger Stadium gives the Dodgers their second consecutive loss in back-to-back World Series appearances.

After losing to Houston in Game 7 last year by the same 5-1 score, the Dodgers became the first team defeated on its home field in consecutive World Series since the New York Giants by the New York Yankees at the Polo Grounds in 1936 and '37.

Boston's victory gives them their fourth title in 15 years and follows a franchise-record 108-win regular season. Boston now has its ninth title overall, tying the Athletics for third-most behind the Yankees (27) and Cardinals (11).

The Dodgers started ace Clayton Kershaw, seen as one of the franchise's best pitchers ever, but one who has had an inconsistent record in the postseason.

On Kershaw's sixth pitch of the game, Boston's Steve Pearce opened up the lead with a two-run homer.

Pearce raised his right arm as he rounded first base. Several Red Sox players spilled from the dugout to greet him.

That made it two homers and a three-run double for Pearce in his last three at-bats.

Kershaw took off his glove and showed little emotion as Pearce finished his trot.

Kershaw has been unable to reverse his postseason legacy. He dropped to 1-4 with a 6.06 ERA in postseason elimination games.

Plagued at times by an aching back, the 30-year-old lefty no longer is the dominant pitcher who won three Cy Young Awards, his famous 12-to-6 breaking ball now more 10 to 4:30.

After the Pearce home run, the Dodgers answered with their own early score as David Freese homered on David Price's first pitch of the game, cutting Boston's lead to 2-1.

Freese hit an opposite-field drive to right on a 91.7 mph fastball that went 402 feet.

After that, Boston's bats kept going for the fences, with home runs from Mookie Betts and J.D. Martinez and, again, from Pearce in the eighth inning.

Pearce's second homer made it 5-1 in the eighth and the Dodgers bats weren't able to rally in the final two innings.