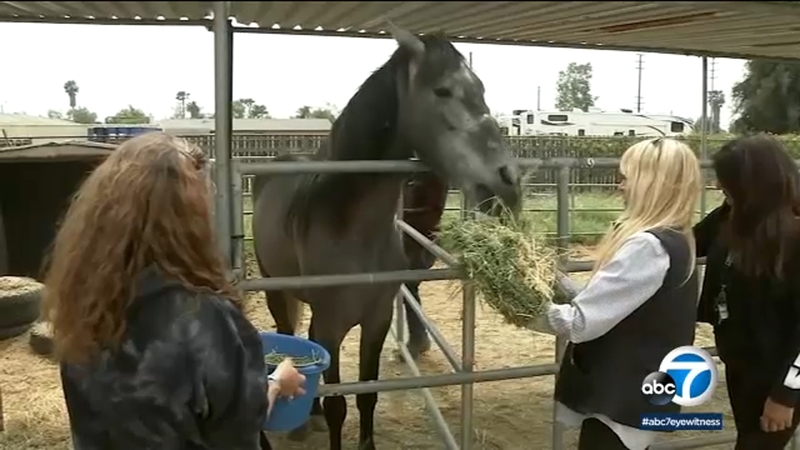 ONTARIO, Calif. (KABC) -- A stable is asking for help caring for two horses that were hurt in a massive fireworks explosion in Ontario as medical costs keep adding up.

The two horses, Lightning and Vavoom, suffered horrible burns in the March explosion that killed two people and rattled nerves in a blast radius encompassing upwards of 80 homes.

Greta Hitzeman with Silver Springs Stables rushed to the scene to help the animals caught in the crosshairs of the blast.

Video captured by AIR7 HD showed firefighters trying to corral one of the horses right after the explosion.

Firefighters came to the rescue of two horses that were trapped in an enclosure surrounded by flaming debris after a house full fireworks exploded in Ontario.

"The horses were running like they were scared to death," Hitzeman added. "You can imagine what they'd been through."

She opened her heart and wallet, incurring the mounting medical bills that come with caring for the two wounded horses.

One of them ended up with severe burns to its side after being pinned against a burning wall, barely escaping with its life.

"It's nasty, it's I'm sure painful. We're treating it the best we can," she added.

Hitzeman says the veterinarian informed her that the horse will most likely need skin grafts because the scaring covers such a large area.

Cinnamon McDonald, a first responder, did not hesitate to help anyone in need, including the animals, on the day of the explosion.

Now, she's trying to help Hitzeman deal with the cost of caring for the horses.

"Vavoom needs an extensive surgery on her jaw and Lightning, obviously, has some serious issues going on with her skin," McDonald said.

A GoFundMe page has been set up to help with the cost of medical care and more for the horses.