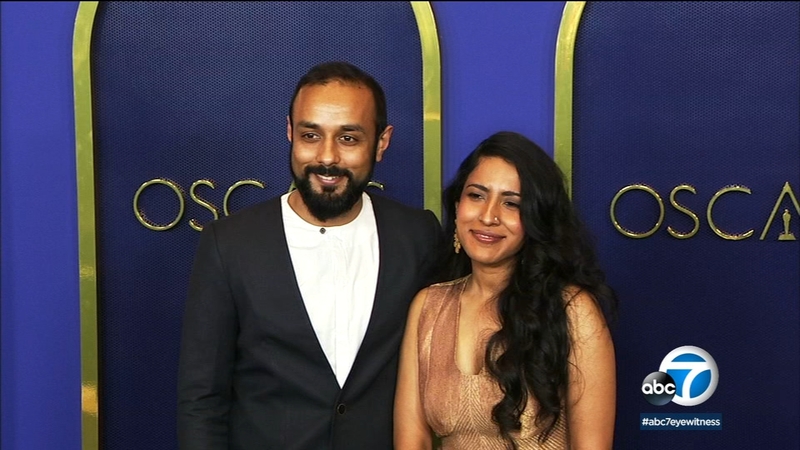 HOLLYWOOD -- Oscar Sunday's red carpet will mark a "first" for one talented filmmaking couple. Sushmit Ghosh and Rintu Thomas are married... and worked as CO-directors on the documentary "Writing with Fire." The film became the first time Indian filmmakers to earn a nomination for best documentary.

"Writing with Fire' tells the story of a group of female news reporters making waves, and making themselves heard.

"It's the story of India's only women led newspaper, some very badass cool women," said Thomas.

The documentary follows the trials and tribulations of the only newspaper in India run by Dalit women who break tradition and risk their lives to report important stories.

"It's a story that talks and speaks to the power of hope, and reimagining the world It's something that we really need right now," said Ghosh. "This is how change making happens. When you diversify, you are allowing for more stories to come in and more kinds of people to come into the room."

'What we hear a lot from audiences is this film inspires me. And that's the biggest reward," said Thomas.

And while the couple has been enjoying their Oscar moment... Thomas had one especially memorable one a few weeks ago at the annual Oscar nominees luncheon when she crossed paths will Will Smith.

"I was about to tell him how much I love his work. Then he turned it around and asked me about mine," said Thomas. "It became less of a fan moment, and more of a colleague moment. It was a pretty out of body experience. Then we took a selfie; he's in focus I am not because I was too excited!"
Report a correction or typo
Related topics:
arts & entertainmenthollywoodoscarswill smithmoviedocumentaryindia
Copyright © 2022 OnTheRedCarpet.com. All Rights Reserved.
OSCARS
Michael J. Fox, Diane Warren among honorary Oscar recipients
Jada Pinkett Smith talks hair-loss 'shame,' outcome of Oscar slap
Oscars Night at the Academy Museum
Harlem Cultural Festival to return to NYC
TOP STORIES
CHP investigating possible 110 Freeway shooting in South LA
West Covina police investigating after dead body found outside Vons
IE brush fire scorches over 100 acres, threatens at least 30 homes
More protests held in downtown LA amid fury over Roe v. Wade reversal
New gun store in Burbank causing uproar with some residents
OC coyote that attacked 2-year-old caught and euthanized
LAPD officer who died was beaten in training, mother claims
Show More
Biden signs landmark gun measure, says 'lives will be saved'
Newsom, California lawmakers reach tentative deal on gas tax rebate
Man arrested in connection with vicious attack in Koreatown
Trudeau: US abortion ruling could mean loss of other rights
Hearing set for teen accused of killing, sexually assaulting girl, 10
More TOP STORIES News