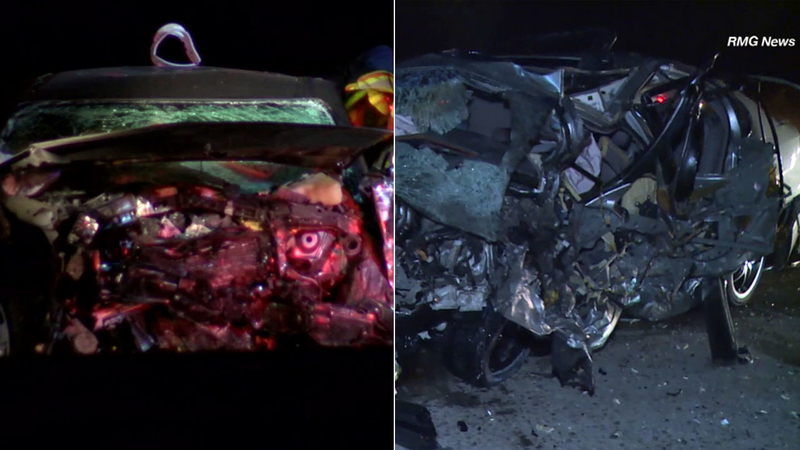 SAN FERNANDO, Calif. (KABC) -- It was a deadly night on Southern California freeways, as four people were killed in two wrong-way crashes in Baldwin Park and in Porter Ranch.

Two died after a wrong-way driver drove at high speeds down the 118 Freeway and slammed into another car.

A suspect was spotted just after midnight Sunday, driving a Toyota Camry the wrong way down the 5 Freeway in San Fernando. The driver made it all the way to the 118 Freeway in Porter Ranch, where that Camry smashed into a silver Lexus near De Soto Avenue.

The wrong-way driver and a victim, later identified as 38-year-old Christian Glenn, of Simi Valley, died at the scene, police said.

Another passenger inside the Lexus was rushed to the hospital in unknown condition. She's identified as 25-year-old Brooklyn Acker, of Simi Valley.

There was also deadly crash in Baldwin Park, where two people were killed after a different wrong-way driver collided with another car on the 605 Freeway.

The crash, which involved a Dodge Challenger and a Honda Odyssey, happened just after 12:30 a.m. near Ramona Boulevard.

When California Highway Patrol officials arrived, they found two people dead at the scene, authorities said. Those deceased were described only as a 35-year-old woman and 25-year-old man. Both were the drivers in each vehicle.

One passenger in the Challenger, identified as 23-year-old Leticia Lopez, suffered a fractured foot and collapsed lung.