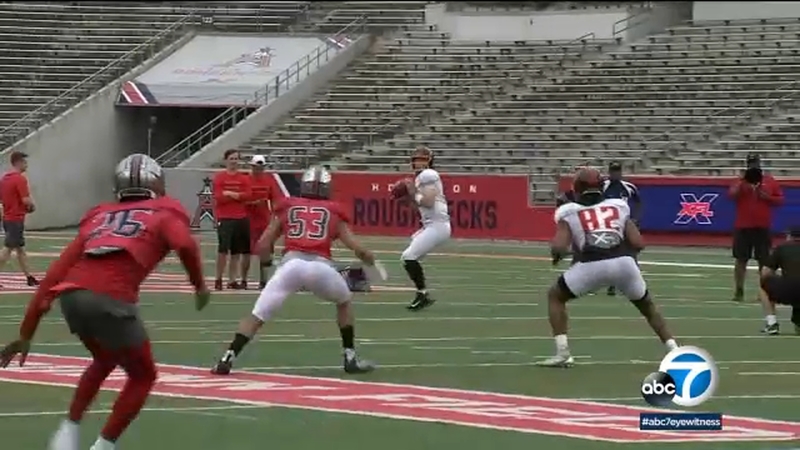 LONG BEACH, Calif. (KABC) -- If you're itching for more football this weekend, the XFL is starting from scratch.

"The reason they're out here (players), the reason the coaches are out here, is because we love doing what we do," said Winston Moss, the LA Wildcats head coach.

The XFL is not designed to compete against the NFL.

Still, players like Josh Johnson - who played for 13 NFL teams - have that other league on the radar.

"I look at it from a bigger picture standpoint: You would like to see opportunities, because there's such limited opportunities (to make it to the NFL)," Johnson said.

The LA Wildcats open the season Saturday in Houston against the Roughnecks. Then for the home opener they face the Dallas Renegades on Sunday, Feb. 16 at Dignity Health Sports Park in Carson.

One rule change includes the option to go for 1, 2 or 3 points after a touchdown.

Another is the ever-popular double-forward pass.

Another change: the regular season is only 10 weeks.

The skill players will also have audio devices inside the helmets to speed up the game.

"When the play is over, we are hearing inside our helmet the next play come in so we can get to the line and get going quicker," said former Westlake High School star Nelson Spruce.

This team has been practicing for a couple of months now.

So, how do we know if they'll be ready for the XFL opener?

"There's going to be a bunch of ups and downs in that first game," Spruce said. "We just need to keep our heads level. We have a lot of talent on this team and we have the right plan in place."

The Wildcats plan to be around for a while.
Report a correction or typo
Related topics:
sportslos angelescarsonlos angeles county
Copyright © 2021 KABC-TV. All Rights Reserved.
More Videos
From CNN Newsource affiliates
TOP STORIES