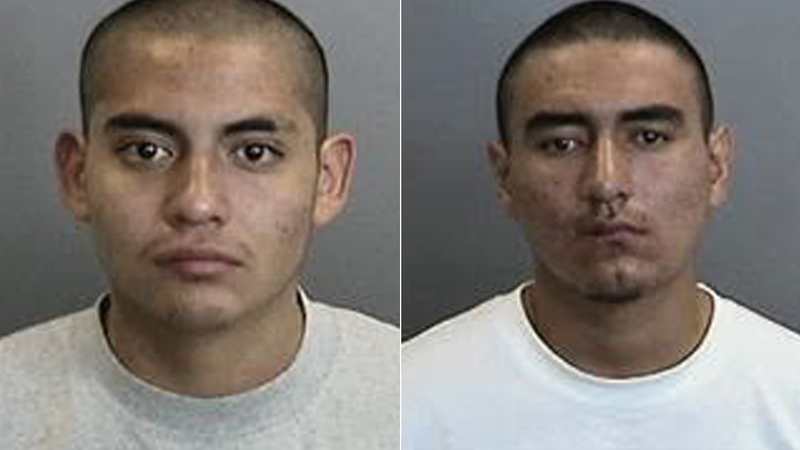 Arrests made in shooting death of 9-year-old Anaheim girl

ANAHEIM, Calif. (KABC) -- Two people have been arrested in connection to the death of a 9-year-old Anaheim girl, who was shot and killed while playing with her friends outside of her home.

Anaheim police arrested 19-year-old Ricardo Cruz of Buena Park and 20-year-old Alfredo Miguel Aquino of Anaheim around 11 p.m. Friday. The two were booked on suspicion of murder and are being held on $1 million bail.

Ximena Meza was in front of her apartment complex on the 2300 block of West Greenacre Avenue when she was gunned down around 7:15 p.m. Wednesday. She was rushed to UC Irvine Medical Center, where she was pronounced dead.

According to investigators, the suspects drove down Greenacre Avenue in a white car and stopped the vehicle near Meza's home. That's when police say one suspect got out of the car and opened fire with a handgun.

Officials say the gunman's intended targets were a group of men who were gathered near where Meza was playing. When the shots rang out, police said the group of men fled on foot and the gunman sped away in the car.

Meza was the only victim in the shooting.

Both suspects are documented gang members, and the shooting was gang motivated, authorities said. The men have criminal records. Aquino is on active probation, and Cruz is on active parole.

"It doesn't really bring peace but at the same time wanted to look at the eyes of the people that killed my girl," said Alexandra Ortiz, the victim's aunt, who broke down in tears. "How can they do that? I just wanted to see them."

Tips from the community helped police track down the alleged killers, and a $57,500 reward was being offered for information leading to the arrest and conviction of the gunman.

"I know there are no words or actions, including the arrests, that will fill the void in your heart. Please know that I and the Anaheim Police Department will continue to stand with you through the justice process," Anaheim Police Chief Raul Quezada said to the victim's family during an afternoon news conference.

Jimenez's parent were too devastated to speak on camera at the news conference, but they did want to thank the community for their help in nabbing the suspects. They also said they are grateful for the overwhelming support they have received.

An online fundraiser has been set up to help Meza's family with funeral costs.