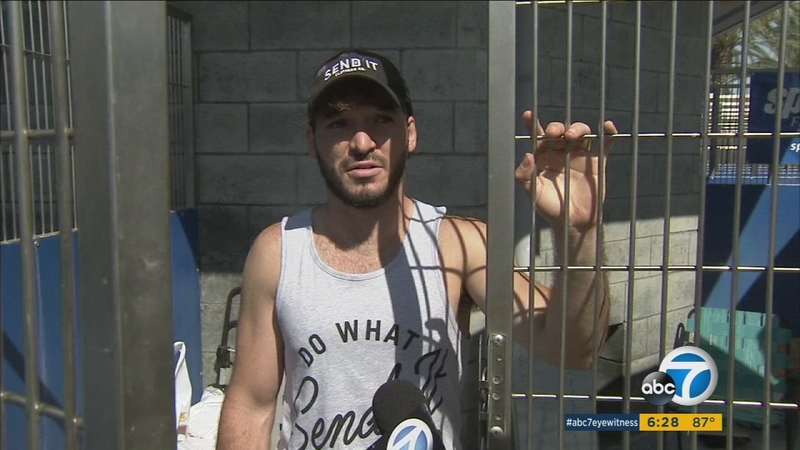 LONG BEACH, Calif. (KABC) -- One man is on an unusual mission to raise money for shelter animals.

In the blistering heat, during a Southern California heat wave, an altruistic YouTube star is taking fundraising to the extreme.

Since Sunday Elton Castee has been trapped in a SPCA Los Angeles cage.

On the other side of a computer screen inside that kennel are thousands of his followers watching him live on YouTube.

"I don't leave under any circumstance," Castee said. "I have a little hole back there. That's where I do my privacy stuff - bathroom and changing all that."

Elton said he adopted a dog from the SPCA LA Long Beach facility years ago. After his dog died in 2016, he wanted to give back to the organization that gave him his best friend.

"Elton has really sacrificed his personal comforts to do this fundraiser," said Ana Bustilloz, director of communication and marketing for the SPCA LA.

It's a sacrifice that's already paying off. He's raised $100,000 since noon Sunday and is staying until he gets $50,000 more for victims of Hurricane Harvey.

"This donation is so significant and we are forever grateful for him doing this. And also to his fans because they're the ones that are spreading the word and asking people to donate," said Bustilloz.

"I just figured now that I have a growing social media presence, I'd like to see what I can really do, you know a positive way," said Castee.

You can donate to his cause and see his livestream here.