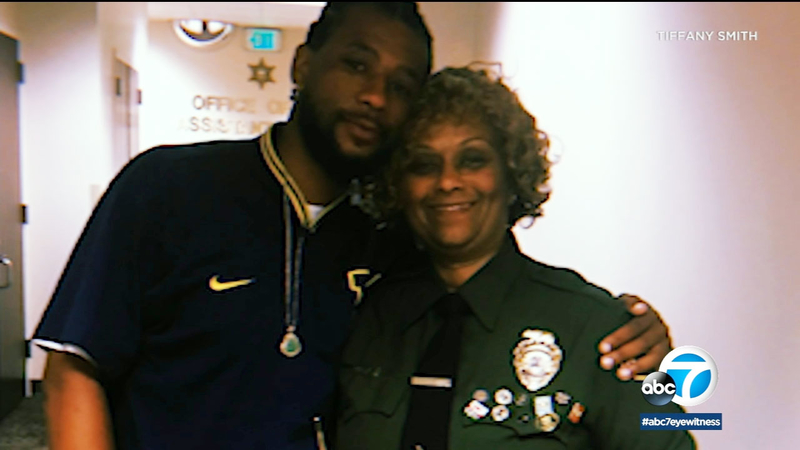 SOUTH LOS ANGELES (KABC) -- Thirty years ago, Tiffany Smith took an oath to protect and serve. And it became the foundation of her life's work -- on and off duty.

Tiffany serves as a corrections officer for the L.A. County Sheriff's Department, and at home, she's mom to seven young men.

"Just her raising us by herself and everything she had to do, run here, run there, still take care of her business, still try to put us in sports, still try to keep us feeling like kids and you know happy while we're dealing with all this turmoil," said Jeremy Smith, Tiffany's son.

Divorced with two young sons, things weren't always easy. But their house was filled with love. And in 2004, Tiffany felt compelled to create a safe space for kids in need.

She made the decision to become a foster mom, taking in five boys - four of them brothers who had been separated across the county.

"As I got to know the boys I got attached to them and they just became like my own children," she said.

Two of her sons suffer from mental illnesses.

"The challenges escalated to a higher level than I could have ever imagined. But through it all, we made it and the kids are grown and well now. So I'm grateful for that," she said.

Friends and co-workers who know Tiffany best say she is the most giving person they know. And this time, they're happy to see her on the receiving end as a Mathis Brothers Pay It Forward finalist.

"I'm older than she is but I look up to her. I admire her for her strength, the courage and her ability to make things happen in her life and for other people," said Tiffany's friend and co-worker, Toni Babers.

"Sometimes even when I go back and look at my life, myself it's amazing to me. So I'm very grateful that someone else sees the beauty in what I've done," Tiffany said.

Being a mother and raising seven boys who are now happy, successful young men, she says, has been her life's greatest accomplishment.

"Children that need just the basics in life, being a solid foundation, stability, love and nurturing and if I'm in a position to be able to render that to children in need, by all means I would jump at the chance to do that again," she said.

Smith is one of three "Pay It Forward" finalists announced this week leading up to Friday's big reveal. That's when the grand prize winner of $10,000 from Mathis Brothers will be announced.
Related topics:
societysouth los angelesfoster kidsfoster carefamilymathis brotherspay it forward
Sponsored Content
Copyright © 2022 KABC Television, LLC. All rights reserved.