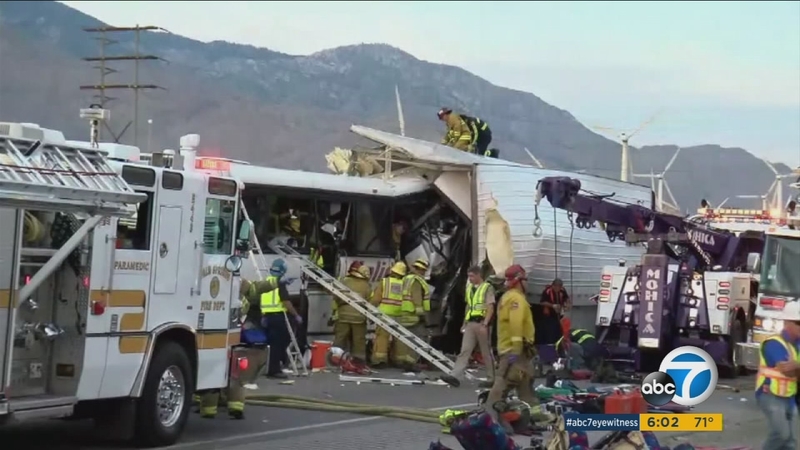 PALM SPRINGS (KABC) -- Thirteen people were killed and 31 others injured Sunday morning when a tour bus slammed into the back of a semi-truck on the 10 Freeway north of Palm Springs, a California Highway Patrol spokesman said.

The bus driver was among the deceased, authorities said. The truck driver suffered minor injuries.

Koreatown residents are mourning the loss of people they knew when a tour bus crashed near Palm Springs, killing 13.

The bus was traveling "significantly faster" than the truck at the time of impact, according to Abele, but it was unclear if either vehicle was exceeding the speed limit.

"The speed of bus was so significant that the trailer itself entered about 15 feet into the bus," the division chief said, adding that there was no indication of braking. "You can see it was a substantial impact."

Emergency responders used tow trucks and a crane to lift the trailer to provide easier access to the bus, whose front end was demolished.

Desert Regional Medical Center in Palm Springs received 14 of the injured victims: four were in critical condition, one was in serious condition and the others were treated and released, hospital officials said.

The cause of the crash was unknown, and the Highway Patrol said it was not immediately known if alcohol, drugs or fatigue were factors.

The bus was coming from Red Earth Casino, near the Salton Sea, the CHP said. The agency said the driver was one of the owners of the tour bus company, Los Angeles-based USA Holiday.

The company has one vehicle and one driver, according to the Federal Motor Carrier Safety Administration. Records on the agency's website show it had no crashes and one inspection in the two years before Oct. 22 and had a satisfactory safety rating.

A phone and Facebook message left for the company was not immediately returned. Its Facebook page has postings about trips leaving the Los Angeles area to casinos around the Coachella Valley and Las Vegas.

The National Transportation Safety Board announced on Twitter that it was sending a Go Team to investigate the crash.