Woman arrested in multi-vehicle crash on 101 Freeway that left 2 dead, including 15-year-old 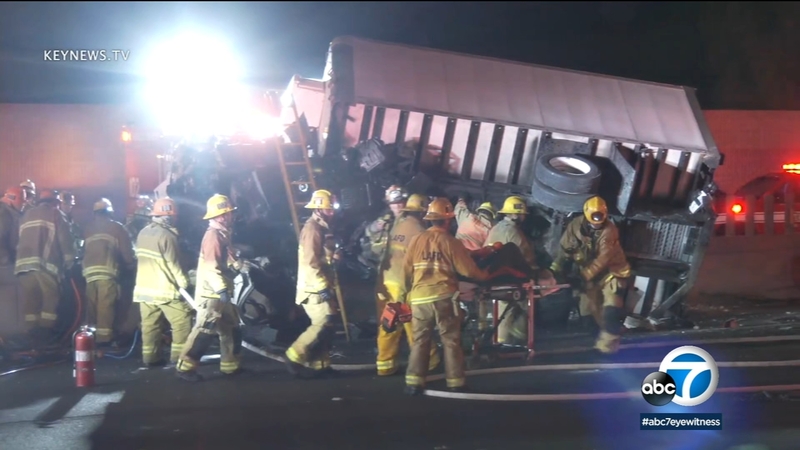 Woman arrested after 2 killed in Sherman Oaks crash, including teen

SHERMAN OAKS, Calif. (KABC) -- A 20-year-old woman has been arrested in connection to a four-car crash in Sherman Oaks that left two people dead, including a 15-year-old boy.

The California Highway Patrol says Bianca Lopez was driving eastbound on the 101 Freeway near Van Nuys Boulevard when she rear-ended a box truck just after midnight Saturday. She was taken to the hospital with moderate injuries.

The CHP said alcohol was determined to be a factor in the crash.

The impact caused both vehicles to lose control and crash into the center divider wall of the freeway. The box truck then entered the westbound lanes and was struck by an oncoming vehicle.

A fourth vehicle, also in the westbound lanes, was struck by concrete debris caused by the destruction of the center divider wall, the CHP said. Authorities say the collisions caused "significant intrusion to the passenger compartment" of the box truck, resulting in the death of two people.

A 40-year-old man was pronounced dead at the scene. Paramedics rushed the 15-year-old boy to Ronald Reagan UCLA Medical Center, where he later died from his injuries, the CHP said.

Both of the deceased, as well as the driver of the box truck who was injured, were residents of Santa Maria.

A 49-year-old woman from Reseda was taken to the hospital with major injuries, while a 37-year-old woman who was behind the wheel of one of the cars involved escaped injury.

The CHP's West Valley office urged anyone with information regarding the crash to call them at (818) 888-0980.