The International Bird Rescue and Los Cerritos Wetlands Stewards save thousands of chicks after a disturbance to their nest.
KABC
By Jaysha Patel 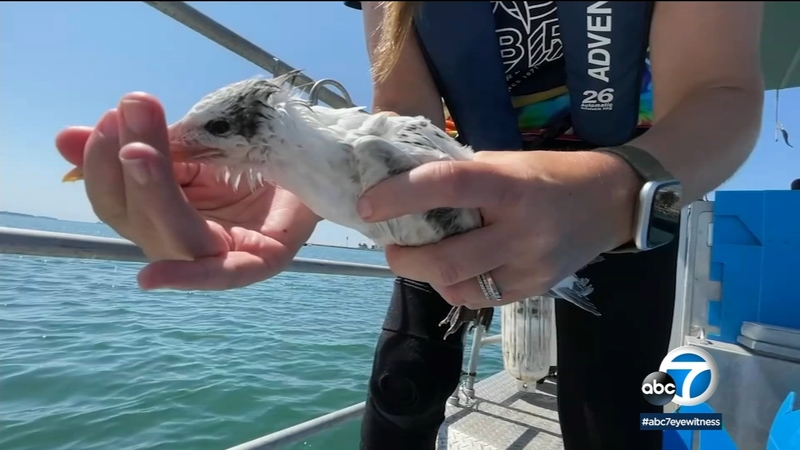 LONG BEACH, Calif. (KABC) -- Elegant Terns are birds that you may see in Long Beach. Officials say there was some sort of recent disturbance to their nests.

Now, thousands of these birds have settled on two barges in the water and they don't all fit. The limited space has led to injuries.

"All these little babies were falling in the water, they were soaking wet, they were cold, they were shivering and I started rescuing them," said Lenny Arkinstall, founder of Los Cerritos Wetlands Stewards.

This started happening around the Fourth of July weekend. That's when the International Bird Rescue teamed up with the Los Cerritos Wetlands Stewards. A month later, they're still hard at work.

As part of the rescue missions, they capture the birds, inspect them, then mark them so they know how many birds have already been checked out.

If the birds look healthy, they'll be released back onto the barge.

"We were estimating about eight to 10,000 adults so there were at least several thousand chicks between the two barges and so far we've rescued over 2,500 chicks from drowning," said Julie Skoguld, director of operations at the International Bird Rescue.

After the birds are rescued on the water, they go to a local rehab center in San Pedro.

"One of the main difficulties has been the sheer numbers that we've received in care. We've received over 600 birds in care," said Kylie Clatterbuck, wildlife manager of the International Bird Rescue.

The Elegant Terns are kept both inside and outside of the facility. Many of them are emaciated or injured from falling off the barges.

The groups are still investigating what happened to the nests. Their goal is to protect and conserve bird species. They hope soon, these birds will fly off when they're ready.

"Our little babies are growing up and you know we're really proud of them. They're learning to fly. It's like watching your kid ride a bicycle," added Arkinstall.