President Barack Obama reflects on his time at the White House 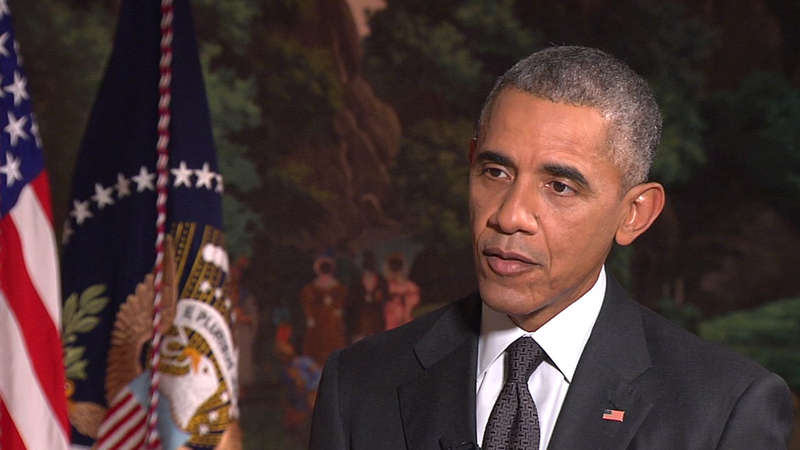 President Obama reflects on his time at the White House

WASHINGTON (KABC) -- As President Barack Obama has a little more than one month left in the White House, ABC7 anchor and reporter David Ono looks back on Obama's legacy.

Obama came into the office on a campaign of change and hope, and he was able to accomplish many of the changes he promised.

It was Super Tuesday in February 2008 and then Sen. Hillary Clinton was predicted to win, but it was Sen. Obama who shocked the world.

Ono was there when Obama made a dynamic speech with the phrase, "Yes, we can." Earlier this year, Ono also had the opportunity to meet with the president at the White House and discuss his legacy.

It was election night 2008 as the Obamas walked on stage to a screaming crowd because he would become the 44th president and the first African-American.

Immediately he faced enormous hurdles, and none bigger than the economy.

"Remember that we were on the verge of complete economic collapse, close to entering into a depression," Obama said. "Now we've got 17 million new jobs, unemployment rate is down to 5 percent. The housing market has recovered."

In 2009, he made his historic trip to Mexico, and ABC7 Eyewitness News was there to capture the moment.

Still, back in Washington, every day was a fight. Progress was slow, and sometimes impossible for the president.

In 2011, Ono sat down with Obama, who was in the middle of a debt-ceiling fight with the Republican House. The increasing animosity between the parties weighed heavily on him.

During his time, the nation has seen his opinions evolve. Back in 2011, he had said he was still contemplating his stance on same-sex marriage. But that changed a few years later with the ruling against the Defense of Marriage Act, removal of Don't Ask, Don't Tell and the Supreme Court's decision on Proposition 8.

In 2010, he awarded the Congressional Gold Medal to Japanese-American soldiers from World War II. They are considered one of the greatest fighting units in U.S. history, and they did it while their innocent families were locked up in concentration camps. Many of these heroes are Southern California residents.

In his second term, we saw the emergence of one of his biggest frustrations - gun control. It was once a joking matter, but then the Sandy Hook Elementary School shooting happened.

He said he is also proud of Obama Care as more people are insured than in any other time in history.

"Right now in California, you can get health care that is high quality for less than the price of your cellphone bill," he said.

Eyewitness News was also there at the president's final State of the Union, where he reflected on his presidency and the future.