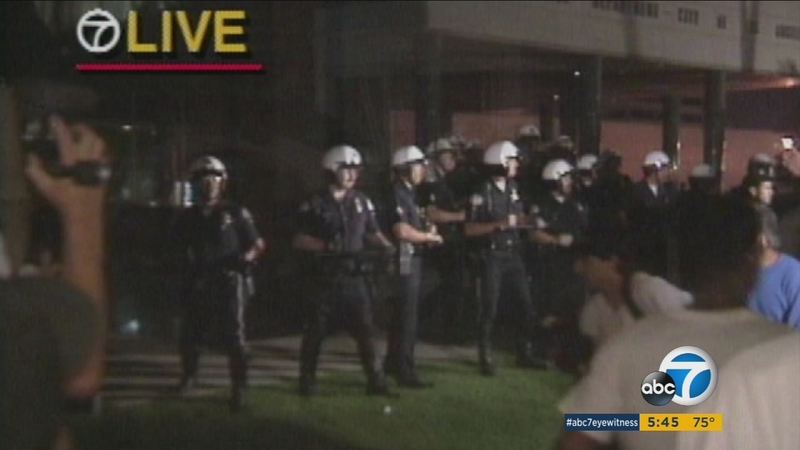 LOS ANGELES (KABC) -- Everyone who lived through the 1992 Los Angeles riots remembers the fear they experienced, and three Eyewitness News photographers talk about risking their lives covering the chaos 25 years ago.

Stephen Coleman was outside the Simi Valley courthouse, where an angry crowd gathered after the not guilty verdicts were read. The defendants left the courthouse one by one. Sgt. Stacey Koon walked right past Coleman's camera position.

"As he approached, the crowd realized it was him. So they surged from behind, they ran across the parking lot and I was grabbed from my shoulders and torn down to the ground live on the air," he said.

Dave Busse was in AIR7 over Florence and Normandie avenues. He said they were about 1,100 feet and you could still feel the tension of the rioters on the street.

"Then it happened, Reginald Denny getting dragged out of his truck and beaten. We kept saying, 'Where are the cops?'" he said.

Shawn McCarthy was at Parker Center. He said throughout the day the crowds continued to build.

"The later it got, the darker it got, they turned and there was a little hut by the parking lot. That got turned over and burned," he said.

Busse said there was an LAPD helicopter that was near AIR7 was flown by a pilot named Terri Lincoln.

"She just said very calmly, 'They're shooting at us. I think we've been hit,'" Busse said.

The police helicopter made a forced landing in a parking lot near Florence and Normandie avenues. There were no officers on the ground. At the controls of AIR7 was Ron Bodholdt, a Vietnam veteran helicopter pilot and sheriff's deputy.

He told cameraman Busse to grab a briefcase from under the seat. Busse said he opened it and saw two guns inside.

"He said, 'Do you know how to use one?' I said, 'I think so.' I handed him his and he said, 'If she has to land and people start coming over the fence, our first job is to get those two officers in our helicopter and take off. But if things go downhill, we may have to use these guns,'" Busse said.

On the second day, McCarthy was sent to Koreatown. He set up for a live shot outside of a jewelry store. He said as he turned the camera, he heard a popping sound and realized there was a shooting in the parking lot.

"They took us live for about 45 seconds, then I heard the director say, 'Ok guys - get out of there! Get out of there now!" McCarthy said.

Busse was robbed at gunpoint and had his camera stolen. Coleman had a run-in with a gang member. He was told to get out of the area, the man grabbed his camera and Busse said the man motioned toward his belt.

All three cameramen said they don't like looking back at the video they captured during those dark days. They said living through it once is enough.

Coleman said he and his crew were frightened and terrified.