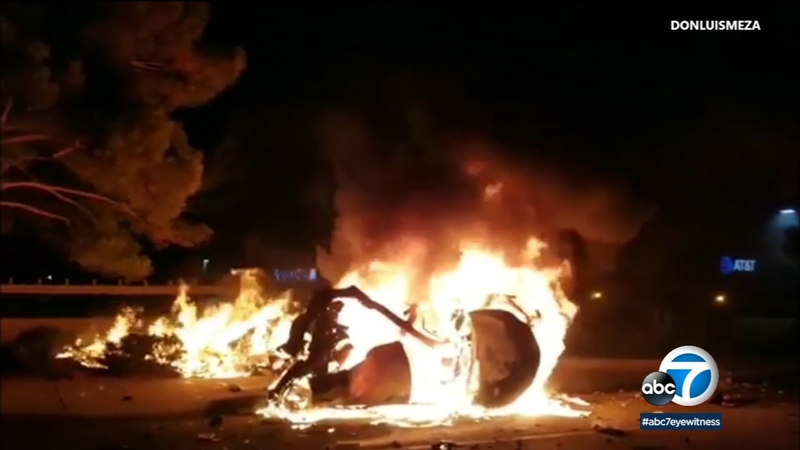 PALMDALE, Calif. (KABC) -- A hit-and-run driver who was possibly street racing slammed into a the back of a car in Palmdale, leaving two innocent people dead, authorities said.

The fiery crash was reported about 12:30 a.m. Wednesday at 12th Street West and Rancho Vista Boulevard, according to the Los Angeles County Sheriff's Department.

"I realized the car was going to explode," said Jonathan Craig, who made an attempt to pull a male occupant out of the vehicle as the fire erupted. "At that time I was struggling, the flames were getting stronger."

Despite Craig's efforts, the driver and passenger of that vehicle were pronounced dead at the scene. The identities of the two victims were not immediately disclosed.

The mother of the man charged in the brutal attack of a woman at a gas station in Gardena is speaking out about his struggles with mental illness.

"I'm not surprised by this," Zamora said. "I knew it was going to happen sooner or later, and it happened today and two unfortunately two people lost their lives today."

Sheriff's Detective Liz Sherman said the other car involved in the crash, a Dodge Challenger, was "traveling at a high rate of speed."