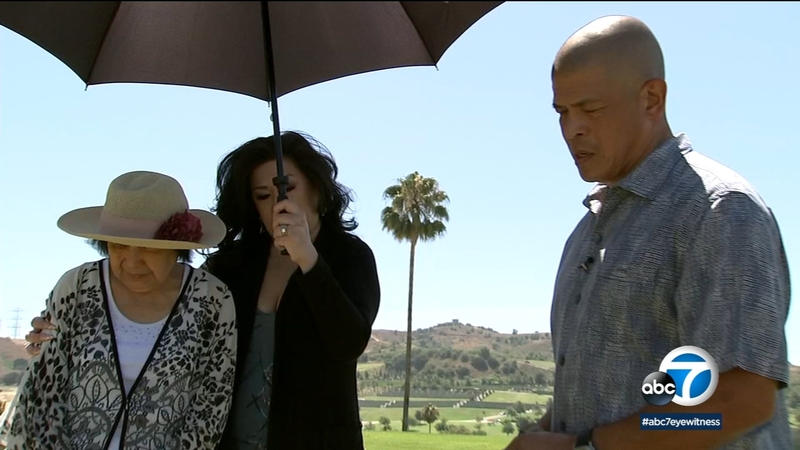 LOS ANGELES (KABC) -- This week marks 20 years since a gunman went on a hate-filled shooting rampage at the North Valley Jewish Community Center in Granada Hills.

A white supremacist walked into the lobby and began shooting, firing 70 shots into the complex.

The gunfire wounded five people, including three children, a teenager and an office worker.

A survivor of the shooting at the North Valley Jewish Community Center reunited with the people who helped save his life 20 years ago and addressed recent mass shootings.

Most remember certain images from that day: an aerial view from a helicopter captured children walking out holding hands with each other, led to safety by police officers.

But there's another story from that day -- the story of postal carrier Joseph Ileto, who was shot and killed, simply because of the color of his skin.

Joseph's family still deeply feels the pain and hurt of his loss, but they are using their voices to speak out against hate and intolerance.

Deena remembers that time clearly. She had just had her son Kyle, Joseph's nephew, and it was a hot summer day.

The family says they feel like the world was cheated in taking a good person like him.

"I miss him so much because he was so good to the family," Lillian said.

"When I watch the news, when there's a shooting, it brings me back," Deena adds.

Ismael said as the news unfolded, officials talked about the children and others at the Jewish Community Center who were shot, and then "there's a little note of a postal worker being shot."

"When it was first reported, he was just mentioned as a postal worker," Deena said. "No name, no identity, no race."

The family wondered, "Why don't they see us?"

"It seemed like we didn't count," Ismael said. "Because they didn't describe him or his heritage and that's mainly the reason why he was killed."

Stewart Kwoh is the founder and past president of Asian Americans Advancing Justice, and a nationally recognized voice and expert in race relations.

He explained that police identified the shooter as Buford Furrow, and that Furrow continued his violent rampage after he left the North Valley Jewish Community Center.

"Then he drove around trying to find a minority. He found Joseph Ileto, a Filipino-American postal carrier," Kwoh said.

It was supposed to be his day off. But Joseph said he would cover for someone who called in sick.

When prosecutors charged Furrow, they said he stated that "the postal worker was a good target of opportunity to kill because he was non-white and worked for the federal government."

"They could have suffered in silence, but they didn't. They spoke out, they marched, they protested," he said.

Despite hate mail and death threats, the family continued to speak out.

The story of Joseph Ileto and the shooting at the Jewish Community Center are now part of an exhibit at the Museum of Tolerance.

"One of the reasons why we chose this painful example is not because we were targeted, it's because of the amazing response. We just felt it had to be here. This was the right place," Rabbi Abraham Cooper said.

Between 2014 and 2018, hate crimes have been increasing by an average of 11% per year. And many go unreported.

Ismael said people told them to keep on speaking, because eventually it changes people's minds.

"You can only change one person at a time, but big hate crimes often start in small ways," Cooper adds.

Ismael recalls the summer his father had a heart attack and died.

"My brother took on the father figure of the family," he said.

He remembers Joseph as an easy going guy, who liked to tell jokes and was an expert chess player.

"He was always the person taking the picture, not being in it because he didn't want to be in the limelight," Deena said.

"What happens to one group affects every group. And we need to work as brothers and sisters, and as neighbors, against hate crimes against anybody," Kwoh said.