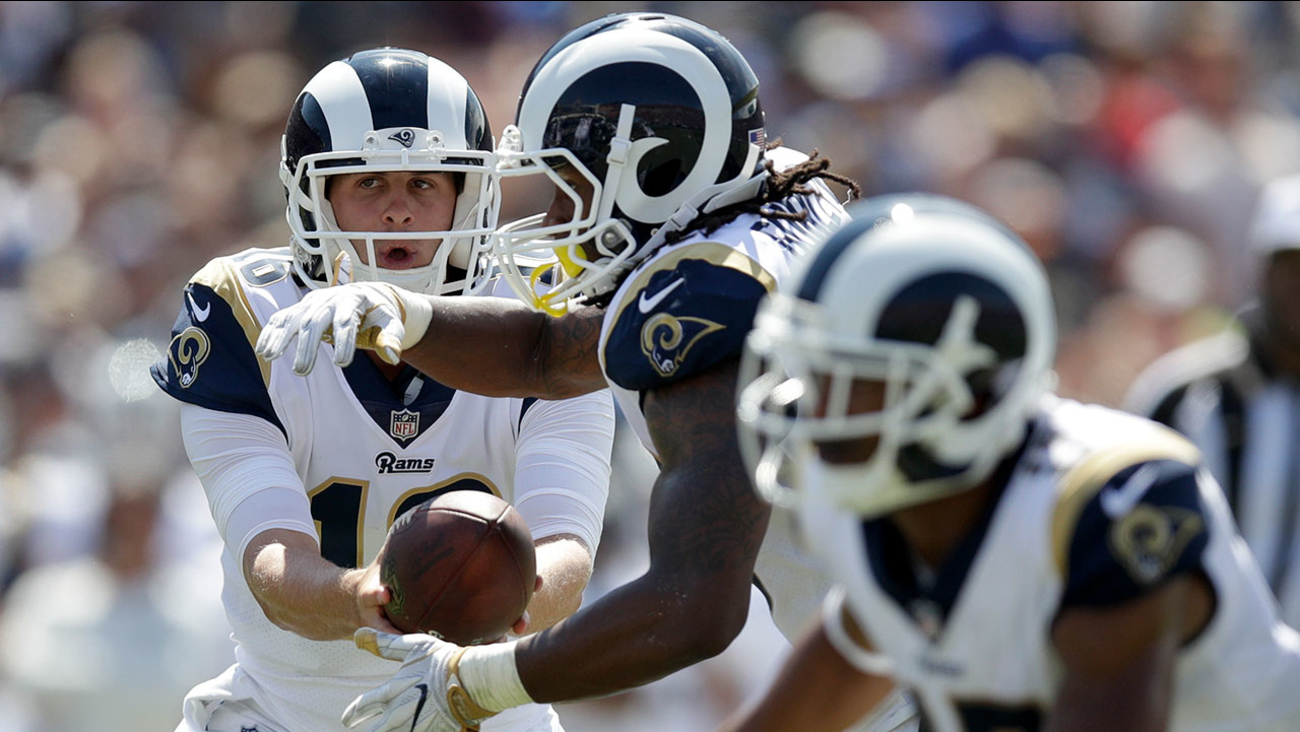 Rams quarterback Jared Goff, left, hands off to running back Todd Gurley during LA's 46-9 win over the Indianapolis Colts on Sunday, Sept. 10, 2017 at the Coliseum. (AP Photo/Jae C. Hong)

LOS ANGELES -- Jared Goff passed for a career-high 306 yards and a touchdown in his first victory as an NFL starter, and the Los Angeles Rams routed the Indianapolis Colts 46-9 Sunday in Sean McVay's impressive debut as the youngest head coach in modern league history.

Todd Gurley had 40 yards rushing and 56 yards receiving while the Rams roared to a 37-3 lead in the third quarter. Los Angeles snapped a six-game skid at the Coliseum with its most impressive performance since returning home from St. Louis last year.

Rams linebacker Alec Ogletree celebrated the win with a Gatorade shower for McVay on the sideline in the final minutes.

Tolzien passed for 128 yards in his fourth career NFL start in place of Andrew Luck, who wasn't ready to return from a right shoulder injury.

Indianapolis also played without center Ryan Kelly and top cornerback Vontae Davis, and the Rams thoroughly exploited every absence with an aggressive, exciting performance for a team that finished last season with 11 losses in 12 games.

The Rams produced their highest-scoring performance since November 2014 in their first game since McVay took over a franchise that went 4-12 in its 13th straight non-winning season and 12th straight non-playoff season.

Rookie Cooper Kupp's first NFL touchdown catch put the Rams up 24-3 in the second quarter. That's a bigger lead than the Rams held at any point over the past two seasons in St. Louis and Los Angeles, when they had the NFL's worst offense.
Report a correction or typo
Related topics:
sportslos angeleslos angeles ramsindianapolis colts
Copyright © 2020 by The Associated Press. All Rights Reserved.
More Videos
From CNN Newsource affiliates
TOP STORIES