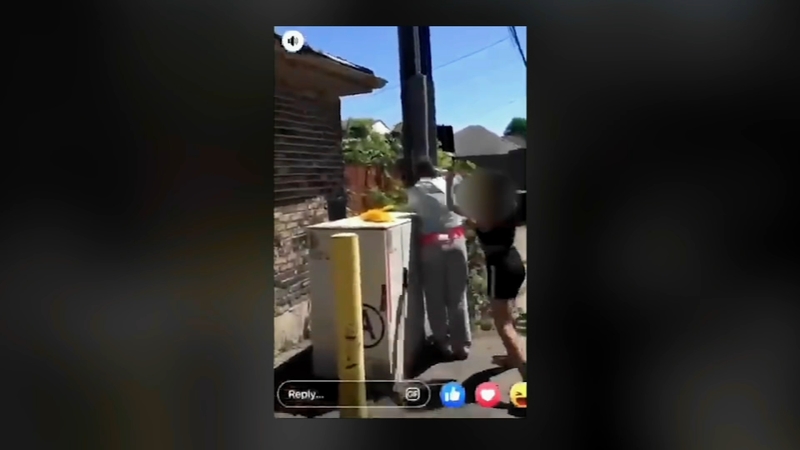 3 girls arrested in attack on girl with special needs

CHICAGO -- Three girls have been arrested in connection with an attack on a 15-year-old girl with special needs in Chicago, police said Thursday.

The attack was captured on cellphone video and posted on social media. The video shows the victim surrounded by at least five other teen girls and a teen boy before she's punched repeatedly as she screams for help.

Three girls have been arrested in connection with an attack on a 15-year-old girl with special needs in Chicago, police said Thursday.

Friends of the 15-year-old victim said the group offered to walk with the teen to the CTA Red Line, but said it was all just a set up so they could jump her and record the beating.

On Thursday, Chicago police spokesman Anthony Guglielmi said three girls, ages 13, 14, and 15, have been arrested in connection with the attack and that charges include aggravated battery and mob action.

Chicago police discuss the attack on a 15-year-old girl that was captured on video and posted on social media.

Police said the attack happened some time during a five-day span the victim had been missing from home. She was located by another friend and the friend's mother riding the Blue Line Tuesday, the same day her family reported her missing.

She was taken to the 11th district where they decided to take her to the University of Chicago Medical Center.

Supporters of the teen said the incident began when the girl, who is a high school sophomore who suffers from a mental disability, was not only beaten but, they claim, sexually assaulted after she refused to perform a sex act on a man the group all knew in exchange for a free tattoo. Other teen girls allegedly did perform the act.
Report a correction or typo
Related topics:
illinoisattackbeatingcaught on videou.s. & world
Copyright © 2021 WLS-TV. All Rights Reserved.
TOP STORIES
How do new CDC guidelines affect SoCal?
CDC reverses course on indoor masks in some parts of US
1 killed, 1 wounded in shooting at Corona movie theater
Ed Buck found guilty in West Hollywood meth overdose case
Walmart will cover 100% of college tuition for its workers
CSU to require all students, staff to get COVID-19 vaccine
Arrest made in fatal shooting of Rite Aid clerk in Eagle Rock
Show More
Tenants of Caltrans-owned homes in El Sereno upset with SB51
OC congresswoman introduces Kobe Bryant Day resolution
Bay Area teen attacked by crocodile while vacationing in Mexico
Video: Dog thrown from truck in West Hills crash
OC restaurant requires customers to prove they are not vaccinated
More TOP STORIES News