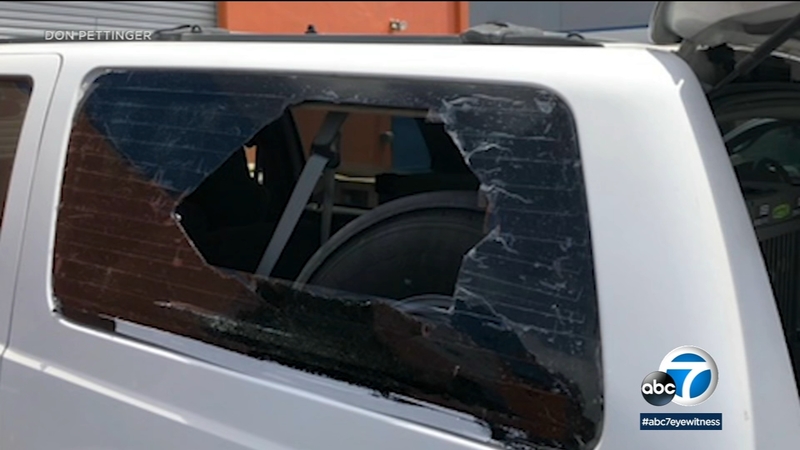 RIVERSIDE, Calif. (KABC) -- Three more vehicles on Monday were struck by BBs or pellets in separate incidents on the 91 Freeway in Riverside, prolonging a disturbing and dangerous trend that has plagued Southern California freeways recently.

The Monday morning incidents occurred within minutes of one other near the Tyler Avenue exit. No injuries were reported.

Shortly before 8 a.m., motorist Luther Castro said he heard a loud noise. That's when he saw the vehicle's rear window was shattered.

"We're traveling on the 91 west, on our way to work, my friend's car was shot and then the other vehicle, the truck, was shot," Castro said, "and then this third vehicle that I didn't even know about."

Castro said he told the California Highway Patrol everything he heard and saw. But did he see who actually did the shooting?

At least 80 incidents of cars being shot at on Southern California freeways have been reported since late April, with the majority of the incidents happening on the 91 Freeway.

"No, the only thing that I saw was like a car swerving off as soon as we pulled over -- but that could have been anybody," he said.

Orange County and Riverside County authorities said at least eight freeway shootings occurred over the weekend and Monday. No description of a suspect or vehicle being sought was available, but investigators said all of the incidents have been similar.

Dr. Don Pettinger said he was heading to work when windows were shot out of his vehicle. He was near the interchange of the 91 and 55 freeways at the time.

"All of a sudden, I heard a large explosion -- like a bang -- in the rear, behind me, so immediately started to see if I hit something in the road," Pettinger said. "Then I started hearing glass shattering and falling, so I checked my mirrors and saw if I was the next victim of being shot at."

The CHP is urging anyone victimized in such a shooting to call 911. Investigators also asked witnesses of related suspicious activity to call the Highway Patrol's Border Division Investigative Services at (714) 288-6336.