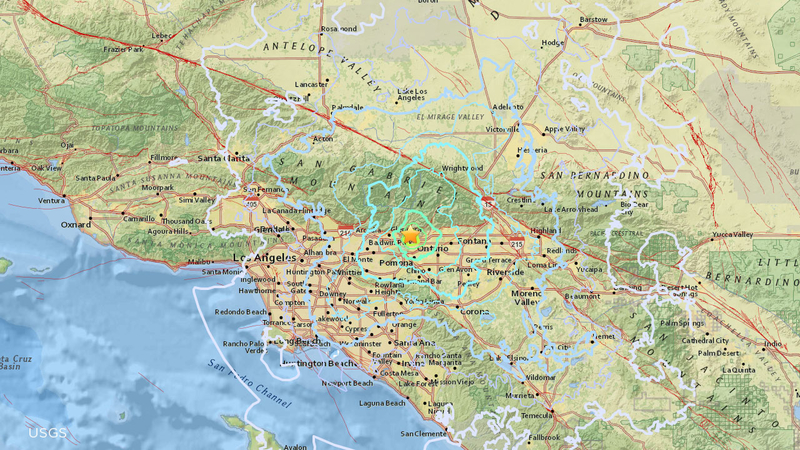 LOS ANGELES (KABC) -- A 4.4-magnitude earthquake struck a little more than 2 miles north of La Verne Tuesday, and residents all over the Southland reported feeling the temblor.

"Honestly it was scary, I ran outside," liquor store owner Sam Georges said.

Residents reported feeling a shake from Ventura County to the San Fernando Valley and all the way to Orange and Riverside Counties around 7:30 p.m. About 5,000 people responded to the USGS "did you feel it?" link on its website, with some people as far as Bakersfield reporting it.

In Old Town La Verne, some bricks were spotted on the ground after coming down from a brick wall.

Tuesday’s quake left its mark in La Verne. Parts of a brick wall came down in Old Town. @ABC7 pic.twitter.com/KeOlpTOEL9

Caltech reported that people near the epicenter said the quake felt like a violent shake. The depth of the quake was about 3.7 miles.

ShakeMap for the M4.4. Shaking at epicenter is Intensity VI - enough to throw light things off shelves. San Gabriel Valley is mostly Intensity IV - clearly felt by most. Westside and South Bay is Intensity II - only felt by people sitting quietly. pic.twitter.com/wwcSv9f58U

"We were just having dinner and all of the sudden the building just heaved and went straight up in the air. It was like two big bounces. We looked up all the roof tiles...the whole roof was moving and all the lights were swaying," La Verne resident Dominic Palmieri said.

A 3.4-magnitude aftershock was also reported by the U.S. Geological Survey just one minute after the first quake in the same area.

Seismologist Dr. Lucy Jones said the 4.4 earthquake is the biggest one to hit the Los Angeles metropolitan area in three years.

Dr. Lucy Jones provided a quick briefing Tuesday night after a 4.4-magnitude earthquake and aftershocks rocked much of the Southland and said it was the biggest to hit the LA Metro area since 2015.

She added it was an "ordinary size" and about a dozen aftershocks smaller than the 3.4 struck the area.

"Like any earthquake in California this has about a 5 percent chance of being a foreshock to something bigger. That means about 1 out of 20 times when we have an earthquake like this, we get another earthquake at the same location, usually within an hour or a few hours," she said.

But by three days after the quake, she added, there's no risk of a larger, related quake hitting the same area.

Jones went on to say that many people felt the quake because of its shallow depth.

"I felt it for about 12 seconds. It was at a very, very low level. I was sitting still and trying to count and see when it would stop," she said. "I think those of us who felt it are surprised at how long the duration was given the magnitude. I think it's attributed to being in the sediments of the San Gabriel Valley catching this and sort of doing a reverb that kept on going."

The prototype earthquake early-warning system that is at Caltech also went off about three seconds before the temblor actually struck, she said.

No damage was reported.