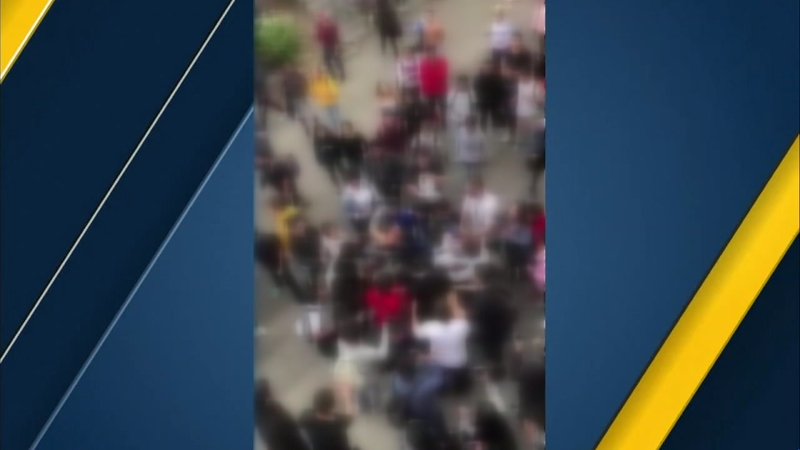 Video from last Wednesday shows dozens of students at Herbert Hoover High School involved in an altercation that has resulted in suspensions.

Police were called to the school around 1 p.m. Wednesday at the end of the lunch hour where dozens of students were involved in the melee.

Several stories have been floated around regarding what started the fight, including a bullying incident.

According to some witnesses, baseball and football players saw the bullying taking place and leaped in to defend the special needs student.

Parents indicated, however, that the argument might have been more complex due to an underlying tension between Armenians, African Americans and Latinos on the sports teams on campus.

"What I'm more concerned about is the lack of communication from the administration here at the school," said parent Nathan Bond. "A lot of different stories coming from different places. We just need a single answer that everybody can be on the same page."

Extra security was posted on campus Monday amid the meeting with parents in the wake of the brawl. School administrators said the campus was safe and resuming "regular instruction."

Superintendent of Schools Dr. Winfred B. Roberson, Jr. released a statement on the incident Monday, saying in part, "Speculation about any motives and triggers for this altercation are very premature. The district is still gathering all of the facts and interviewing witnesses to the incident to determine exactly how and why this occurred. If warranted, additional appropriate disciplinary steps will be taken once that review has been completed."
Report a correction or typo
Related topics:
glendalelos angeles countyeducationhigh schoolfightschool fight
Copyright © 2021 KABC-TV. All Rights Reserved.
TOP STORIES
911 call: Brian Laundrie 'was slapping' Gabby Petito
Video appears to shows man force woman into car in Bell Gardens
2 boys last seen in Altadena reported missing
Pilot arrested for 3 OC sexual assaults
COVID-19 has now killed as many Americans as Spanish flu
California has lowest COVID-19 case rate in US
'Devious licks' TikTok challenge has students vandalizing bathrooms
Show More
1 man dead after officer-involved shooting in Signal Hill
White House looking into footage of Border Patrol agents on horseback
TX doctor who defied state's new abortion ban is sued
Pfizer says COVID vaccine safe, effective for kids 5-11
Divers remove hundreds of pounds of trash from ocean in Malibu
More TOP STORIES News