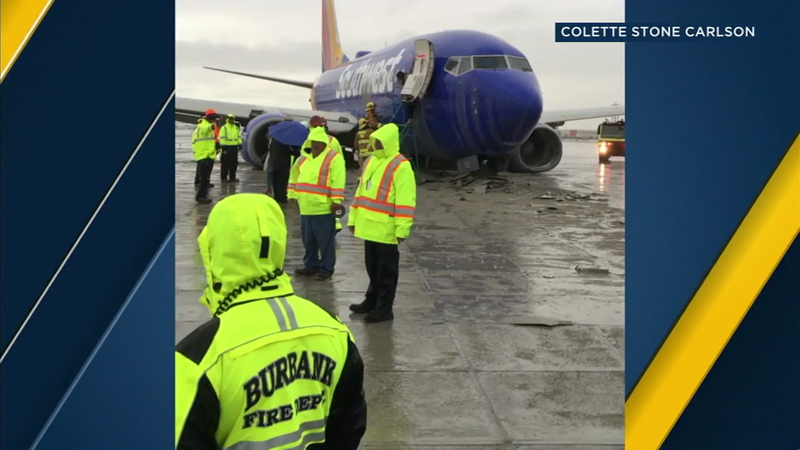 BURBANK, Calif. (KABC) -- What was remarkable to passengers about Southwest flight 278 skidding off the runway was how unremarkable it felt.

On Thursday morning, a Southwest flight rolled off the end of a runway at Hollywood Burbank Airport after wet conditions made for a tougher landing.

An FAA spokesman said Southwest Flight 278 rolled off the end of runway 8 while landing at the airport shortly after 9 a.m. It ended up in an area called the Engineered Material Arresting System (EMAS). No injuries were reported.

"There wasn't any hysteria or anything. Honestly, I don't think many people were aware of how severe it was," passenger Kyle Lalone said.

A Southwest flight rolled off the end of a runway at Hollywood Burbank Airport after wet conditions made for a tougher landing Thursday morning.

The potential severity was evident in March 2000 on the same runway. Southwest Airlines flight 1455 plane descended at a speed of 200 miles per hour.

Forty-three people were hurt when the jet crashed through the fence and into traffic lanes on Hollywood Way.

One result was a runway cushion, the EMAS or EMASMAX, developed by Safran Aerosystems. A long pad of manufactured tiles are installed at the end of the runway. They are composed of layers of recycled glass and porous concrete.

The tires of an aircraft sink in the crushable material.

The EMAS systems in Burbank were installed in phases starting in 2002. The system that stopped the jet Thursday was put in place in 2006.

The FAA said it's performance was textbook.

"There have been 14 situations where the EMAS bed have safely stopped aircraft that have overrun the runways," FAA spokesperson Ian Gregor said.

EMAS is credited with saving the plane carrying then-Vice Presidential candidate Mike Pence in October 2016. His campaign plane lost traction on a rain-soaked runway at La Guardia Airport. It hit the arrestor bed and came to a controlled stop.

EMAS is critical where runways cannot be extended, such as in Boston.

"Logan Airport is on the water. If you were to miss it on the ice you would be damp," passenger Joan Cotton at Burbank Airport said.

Today, the damaged aircraft is gone and flights have resumed.