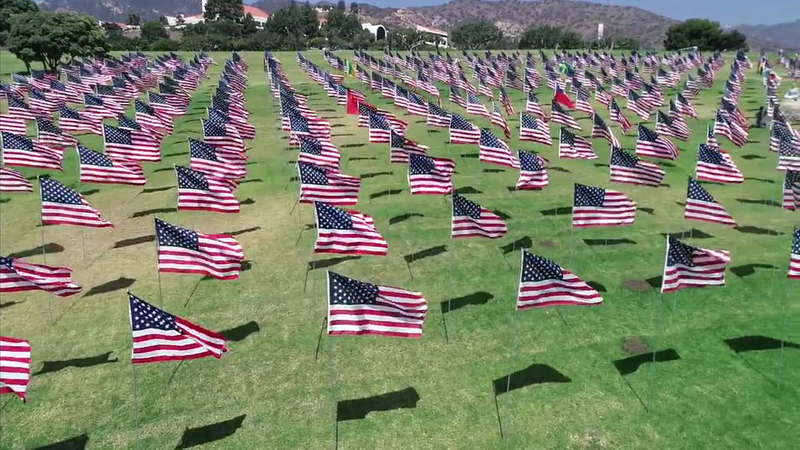 'Waves of Flags' memorial at Pepperdine honors victims of 9/11

MALIBU, Calif. (KABC) -- Los Angeles transplant Angie Correa struggles every 9/11 to come to terms with what happened and process what it was like in New York City that dreadful day.

"It was one of the most tragic things that's happened to our country, but I think being there and knowing how we came together as a community, and how we got through it, that's what humanity looks like and what our country looks like," Correa, a former New York City resident, said.

Correa pays her respects by visiting the 9/11 installation at Pepperdine University, where 2,977 flags have been placed into the ground for the lives lost.

"I can't be with my family and my friends on the east coast," Correa said. "This is my way of giving love and support to all the families that are at the memorial today."

Neil Hulme is visiting from the United Kingdom and stopped with his family, locating the Union Jack among all the U.S. flags.

"Absolutely unbelievable. We passed it yesterday," Hulme said. "We were going to a fish restaurant and we passed it, and we said we had to come back, especially since it's the remembrance day. It was just out of this world."

This is the 11th year Pepperdine has commissioned the "Waves of Flags" installation. The university also held a ceremony observing 9/11.

One of those honored at the ceremony, an alumnus who lost his life on Flight 93, Thomas E. Burnett Jr.

"Everybody was affected by this. Not just the people who lost their loved ones," Sandy Godall, who visited the memorial, said. "Not only the airlines who lost aircraft. The world has not been the same since."