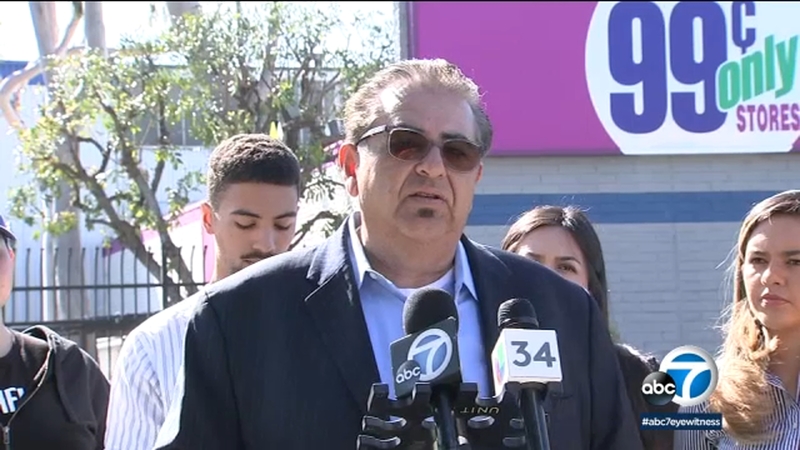 COMMERCE, Calif. (KABC) -- An environmental consumer group wants its concerns heard by a discount retailer that they say has not proven products they sell to consumers do not contain harmful, toxic products.

On Tuesday, in the city of Commerce, Jose Bravo led several people to the entrance of the 99-Cents Only Stores headquarters. Protesters were upset about what the discount chain is selling to its customers.

Last year, Jason Kidd, the company's chief operating officer and president, greeted Bravo at the door promising Bravo's environmental consumer group a meeting in the near future to discuss the sale of toxic chemicals contained in products sold at discount chains like his.

But on Monday, Bravo received a phone call from Kidd.

"He told me that they had been working on some chemical policy. I invited Jason to come out."

The company's president declined the offer.

On Monday, the company's COO did tell Bravo by phone that the company is testing some products, but wouldn't say how, which products and for how long the company had been testing them.

On Tuesday, a spokesman gave the group a statement and fresh produce, which the company says gives customers healthy options.

Janet Valenzuela, who lives in Boyle Heights, is worried about her neighbors.

"There is a reason why 99-cents store and dollar tree stores are located in low-income communities and that's because we're absent when it comes to grocery stores or wholesale stores."

On Tuesday, 99-cents Only provided a written statement, saying in part:

"...We require that all of our suppliers provide us with product that meets or exceeds all applicable federal and state legal requirements. We....appreciate the outreach from the Campaign for Healthier Solutions. We will be meeting with the Campaign in the near future."

The same promise from last year.

"We're not trying to get rid of 99-Cents stores in our community, we just want them to be better consumer-based products for our community," said Valenzuela.