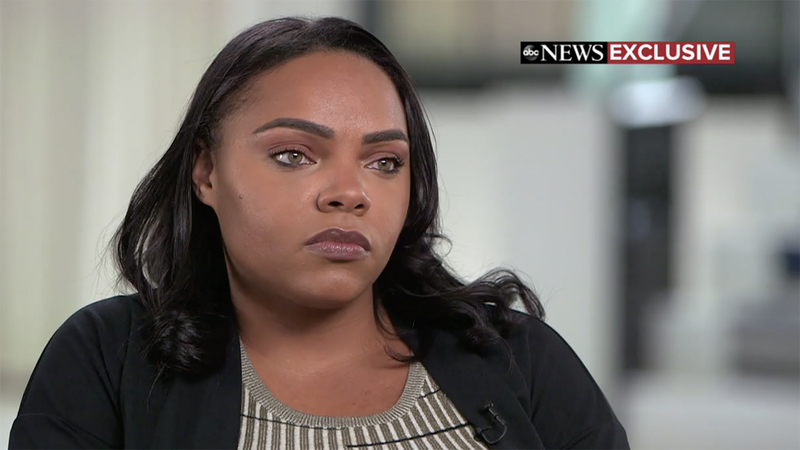 The fiancee of late NFL star and accused murderer Aaron Hernandez is breaking her silence after the release of a new Netflix docuseries about him and said she's upset about its speculations on her fiance's sexuality.

Shayanna Jenkins-Hernandez said she's still shaken after Hernandez died by suicide in 2017 while in prison for murder. He was 27 years old.

An autopsy revealed he appeared to suffer from chronic traumatic encephalopathy, or CTE, a disease caused by repeated head injuries that can lead to behavioral problems.

The Netflix docuseries "Killer Inside: The Mind of Aaron Hernandez," premiering Jan. 15, digs deep into the former football player's life.

"I'd be a cold person to leave someone that had nobody at all," she said.

At the peak of his career, Hernandez was playing for the New England Patriots, signed on with a $40 million contract.

Yet during the 2013 off-season, he was arrested in the murder of his friend Odin Llyod, who was found shot dead near the tight end's Massachusetts home.

The mounting evidence against the football star resulted in his conviction, ultimately leading to Hernandez taking his own life in 2017.

The docuseries chronicles this trial but showrunners also spoke to a high school teammate and friend of Hernandez, Dennis Sansoucie, who said the two engaged in a sexual relationship while in high school.

"You can't describe someone's sexuality without them being here," Shayanna said. "Although I've had a child with Aaron ... I still can't tell you how he was feeling inside. No one can."

She said she never speculated her fiancee was bisexual or gay.

"If he did feel that way or if he felt the urge, I wish that I was told. I wish that he, you know, he would've told me cause I wouldn't -- I would not have loved him any differently. I would've understood ... It's not shameful, and I don't think anybody should be feeling shameful on who they are inside, regardless of who they love," she said.

The series, playing phone calls from prison between Hernandez and his friends and family, included some from the couple's young daughter.

Shayanna said those calls were hard to hear.

"Especially with my daughter being a minor ... Those are things, as a mother, you want to keep to yourself, you know? And although they may not be played back, it's just, it's hard. It's hard to listen to," she said.

Shayanna said documentarians asked her to participate in the series and offered compensation, but she said she wanted to leave these memories in the past.

In the wake of the Netflix series, Hernandez's now 8-year-old daughter is growing up in the shadows of controversy surrounding her late father.

"I would describe her father as a loving individual who obviously loved her ... I think it's more bringing back the memories for her and let her form her own opinion. And I think that would be just enough to let her know," Shayanna said.
Report a correction or typo
Related topics:
sportsaaron hernandeznflu.s. & world
Copyright © 2021 KABC-TV. All Rights Reserved.
More Videos
From CNN Newsource affiliates
TOP STORIES