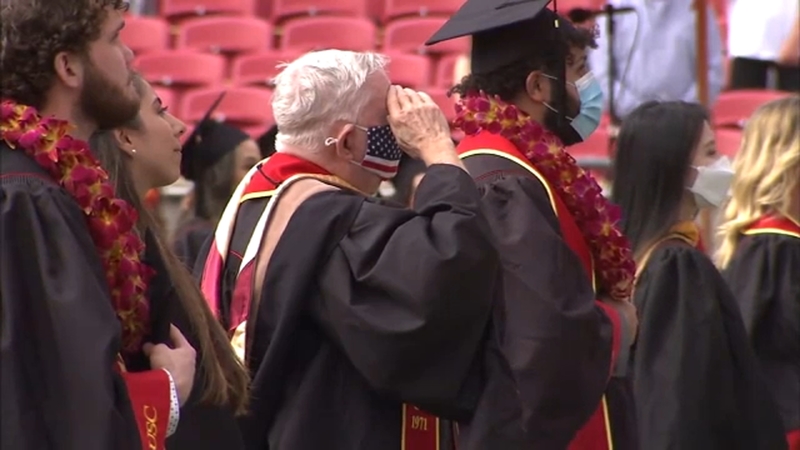 LOS ANGELES (KABC) -- Among the students who donned their cap and gown and walked in USC's commencement ceremony last week was 78-year-old Robert Kroener.

"It has been a long time coming. So, I've waited a long time for this," said Lt. Colonel Kroener.

The retired Air Force lieutenant colonel and civil engineer earned his master's degree from USC in 1971. He finished his course work in the summer and was called back to active duty before he was able to walk with his graduating class.

"My military obligations did not preclude me from being able to come back. So, I had to finish out my tour of duty then I put in a total of 28 years in the Air Force -- just never had the time," he said.

It wasn't until reading a USC alumni magazine that he got the idea to ask about walking in a graduation ceremony. Kroener said he reached out to USC's Marshall School of Business.

"Regardless of when you graduate, if you want to walk across that stage, we will welcome you back and we'll do everything we can to make sure they get the credit and honor and to congratulate them in the way they deserve," said Paul Duke Lee, commencement lead with the USC Marshall School of Business.

Kroener and his wife, Donna, drove from their home in Arizona to visit the campus for a walk down memory lane ahead of graduation.

"I think it's closing a chapter on his life with all the hard work and dedication he put in to get his master's, his MBA, and didn't get to enjoy the fun and the ceremony of it all," said Donna Kroener.

On Monday, Kroener joined other graduates in his cap and gown, wearing a custom sash with his military service and Class of 1971 emblazoned on it. In the stands watching were Kroener's wife, children and grandchildren.