"We are bringing communities together;" Veterans group shows sense of purpose after leaving a branch of the armed services.
KABC
By Jade Hernandez 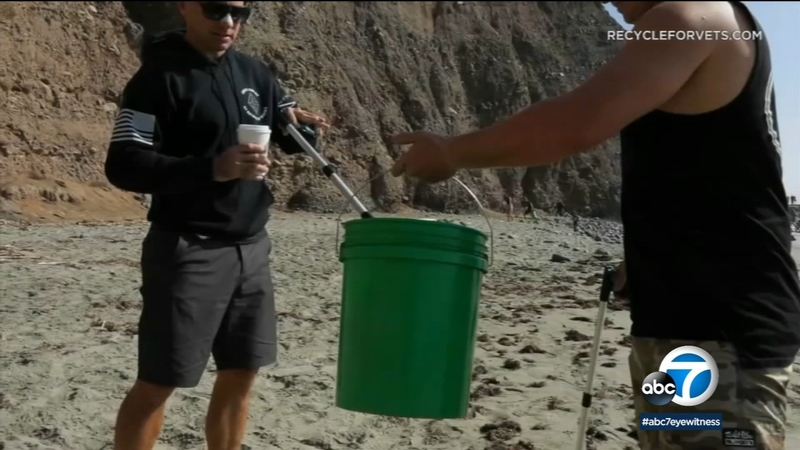 LONG BEACH (KABC) -- A feeling of unity can only come by banding together for a cause. ABC7 is saluting a group of veterans in Long Beach who are helping to save the environment.

The group considers this a bit of a "reconnaissance mission." Recently, they hauled away more than 300 pounds of trash found over a little more than two mile stretch.

Kyle Hansen co-founded Recycle for Vets, where ex-military RSVP for cleanups online and then hit the beach.

"It's great to know we are bringing communities together, bringing like-minded individuals, bringing awareness to the community that this is a problem and it can be fixed," said Hansen.

This for-profit group wants to show veterans they can still have a purpose in life after leaving a branch of the armed services.

"Transitioning out of the military is kind of rough and knowing that I can serve my community and being around with my Marines, it's pretty awesome," said Eric Ramos, U.S. Marine Corps.

"It's very therapeutic. You feel really rewarded. You've gone out there. You've done something. You've made an impact," said Andrew Levin, a co-founder of Recycle for Vets.

It's an impact you can gauge after a cleanup.

'There's really nothing being done. Nobody is taking responsibility. Nobody is making the changes that need to be done. It's different to talk about it then do it," said Brandon Fiedor, a Recycle for Vets member.
It's loosely based on something service men and women might remember from their time in the military.

"In the military we do this thing called police call," said Levin. "It's getting in a line and you pick up trash."

So these guys get a few laughs at the idea of what they do at first; but apparently, don't knock it until you try it!

"Then when they get done with it they just feel that sense of accomplishment," said Levin. "And they've done something good for the community."

It also creates a way to network, and bond, organically. All while finding a new purpose.

"There's a certain sense of brotherhood that you have when you're in that it's hard to find when you leave," said Bryan Bird, "Recycle for Vets" ambassador.