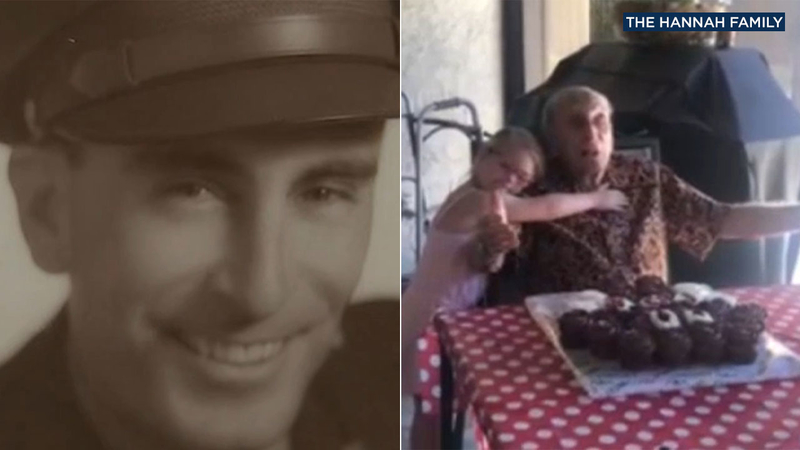 GLENDALE, Calif. (KABC) -- ABC7 salutes a World War II veteran who turned 105 years old this month. Lt. .Col. Jerry Rimpau was born to fly and for most of his life, that is just what he did. And now his family is celebrating his amazing life!

"He got his pilot's license when he was 16 years old, he soloed from Mines Field which is now LAX," said Garry Hannah, Rimpau's son-in-law.

When World War II broke out, Rimpau was flying C-47s over Europe. On D-Day, he piloted a plane that dropped U.S. Army paratroopers into France. But not every mission ended successfully.

'He was shot down three times. Two times he had to bail out into French territory, was rescued by the French underground, brought them back to American lines," said Hannah.

Despite that, Rimpau never hesitated to get back in a plane. For his bravery, he was awarded a host of medals.

Capt. Jonathan Pryor served as a trauma surgeon in Iraq and Afghanistan. And last year, he was activated again, to help in the battle against COVID-19

"For his service he was awarded the Distinguished Flying Cross, the Purple Heart with two Oak Leaf clusters, Silver Star, German Occupation Medal, European Victory Medal, and a number of others that he was awarded," said Hannah.

Rimpau retired from the Air Force as a lieutenant colonel and recently celebrated his 105th birthday.

"We just had a party for him for his 105th and he enjoyed the heck out of that," said Hannah.

While he lives in a care facility now, his family says Rimpau still lives for the moment and is always ready to share stories of his time in the air. For his service to his country, ABC7 salutes Lt. Colonel Jerry Rimpau.