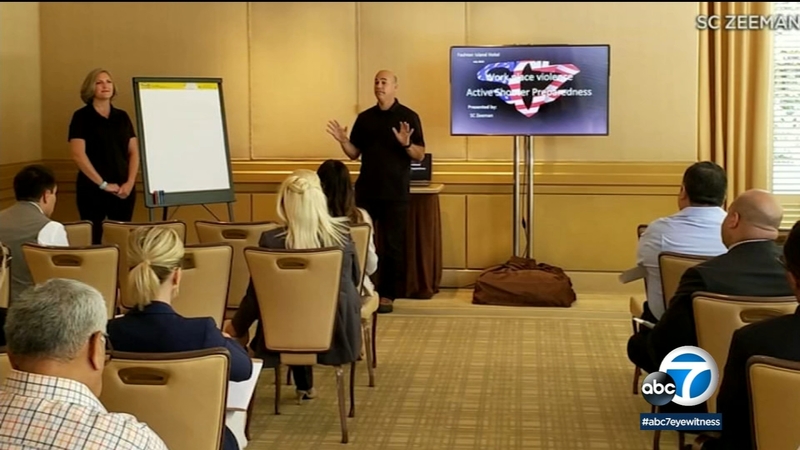 Those left behind at the Route 91 Harvest Festival laying on the ground, frozen with fear, were still on the minds of Shannon and Troy Zeeman two years later.

"When we ran, we had to leave those people behind. That is one thing that still triggers me. You still see their faces," Shannon Zeeman said.

"I think the hardest thing to deal with is the fact that you can't save everybody. I think that's it, so this is the way we can do it," Troy Zeeman said.

With the support of their Newport Beach Police Department family, Shannon and Troy Zeeman returned home to see who they could help in the future.

The Zeemans are fighters. Shannon's opponent was breast cancer.

"We were actually going to celebrate that I had finished chemo," Shannon Zeeman said, adding, "What better way than to go sing and dance for three days with friends?"

Troy's battle come on the third night of the country music concert when he was shot in the right leg.

"Even though I didn't get medical attention, we were able to help people. I was still able to jump walls, jump fences, take people out of the venue and give medical attention to other people while I was shot," Troy Zeeman said.

The two used their personal and professional experiences to start SC Zeeman. By September, the security consultants had showed at least 200 groups how to prepare for an active shooter emergency.

Mickey Mason was one of the employees at the couple's presentation at Kittyhawk Products.

"You try and think about it when you see the active shooting stuff that's been going on, so you try and think what you would do, but going through a class, it really puts in in perspective," Mason said.

The company's president, Brandon Creason, said the lessons were well received by his employees and went beyond the workplace.

"It has been really positive, so our employees now have a really good understanding of what an active shooter is looking for," Creason said.

The Zeemans spoke of what areas to stay out of, where to hide, when to fight and never giving up.

"There were a lot of people that were injured and shot there, but your bodies are so resilient with your adrenaline and everything, but never give up, always fight through and get yourself out," Shannon said.

It was also therapeutic for the Zeemans.

Troy Zeeman helped get at least 20 others to safety on the night of Oct. 1, 2017. He's been recognized for his heroism at an Angels game and awarded the Medal of Valor from the city of Newport Beach, but they continue reliving this nightmare because if this happens again, they don't want fear to win.

"One of the things that helped me get past a lot of the carnage in Las Vegas was helping people and giving people hope was the way I could do that," Troy Zeeman said.