"I want to give my side of the story," Travis McMichael testified.
ABCNews
By Bill Hutchinson Travis McMichael testifies in his own defense in Ahmaud Arbery trial

BRUNSWICK, Ga. -- In a high-stakes move, Travis McMichael, the man who fatally shot Ahmaud Arbery, took the witness stand in his own defense Wednesday afternoon and testified that during what he described a "life-or-death" encounter he had no choice but to shoot the 25-year-old Black man.

"He grabs the shotgun. And I believe I was struck on that first instance that we made contact," the 35-year-old Travis McMichael testified of his death struggle with Arbery on Feb. 23, 2020, in the Satilla Shores neighborhood near Brunswick, Georgia.

His attorney Jason Sheffield asked, "What were you thinking at that moment?"

Breaking into tears, Travis McMichael answered, "I was thinking of my son. Sounds weird, but that was the first ... this is the first thing that hit me."

Travis McMichael was the first defense witness called to testify a day after the prosecution rested its murder case against him, his 65-year-old father, Gregory McMichael, and their neighbor, William "Roddie" Bryan, 53.

Travis McMichael began his testimony by saying he was aware he had no obligation to testify.

Opening statements have begun in the murder trial of three white men, charged in the killing of Ahmaud Arbery.

"Do you want to testify?" Sheffield asked.

Travis McMichael responded, "I want to give my side of the story. I want to explain what happened and to be able to say what happened from the way I see."

The McMichaels and Bryan have pleaded not guilty to charges of murder, aggravated assault and criminal attempt to commit false imprisonment.

The defense began putting on its case after Judge Timothy Walmsley rejected each defendant's request to acquit them after their lawyers argued the state had not met its burden of proof.

Travis McMichael testified that when he first moved into his parents' home in the Satilla Shores neighborhood in 2018, the waterfront community was mostly peaceful, full of retirees and young families with children.

"It's one of the typical small-town neighborhoods," he said. "You'd have people ride around golf carts, people walking dogs, people with their kids, the little power wheels. ... And it's just a real quiet community."

But Travis McMichael testified that after moving to Satilla Shores, he and his neighbors began to experience a crime wave with frequent burglaries and "more suspicious persons lurking around."

"It was rare at first, but it started building up," he said of crime in Satilla Shores.

Defense attorney Kevin Gough, who represents one of the men on trial for the killing of Ahmaud Arbery, sought Thursday to have the judge limit the number of Black pastors in the courtroom.

He said his own car was burglarized multiple times to the point he would just leave it unlocked. He also said a Smith & Wesson pistol was stolen from his truck parked outside his parents' house on Jan. 1, 2020.

Travis McMichael said the crime spike was the talk of his household and became a major topic of discussion among his neighbors and on a community watch Facebook page.

Sheffield then asked Travis McMichael about his background as a member of the U.S. Coast Guard between 2007 and 2016. He said he had extensive training in law enforcement, including the use of deadly force and de-escalation, while in the Coast Guard and that besides his primary job as a mechanic, he also participated in search-and-rescue missions, and immigration and drug enforcement operations.

He said one de-escalation technique he was trained to do was to use a firearm as a deterrent.

"You pull a weapon on someone from what I've learned in my training that usually causes people to back off or to realize what's happening," McMichael testified.

He added that on two occasions as a civilian he once scared off would-be robbers at an ATM machine by showing his gun and on another occasion deterred a potential carjacker.

He said that as part of his training in the military he also learned never to let someone take his gun in a confrontation because if that occurs they could use it to harm him and others.

Sheffield directed Travis McMichael's attention to an incident that occurred on Feb. 11, 2020, 12 days before the fatal encounter with Arbery.

He testified that he was driving to get gas when he saw a man dart across the road in front of him and start "creeping through the shadows" outside a home under construction down the street from his parents' house.

"I got out of the vehicle to ask him what he was doing, maybe run him off," Travis McMichael said.

He said the man came out of the shadows toward him.

"He pulls up his shirt and goes to reach for his pocket or his waistband area," he testified. "It startled me. It freaked me out."

Of the 12 jurors who will be sworn in Friday for the trial of the men who killed Ahmaud Arbery, 11 are white, and one is Black.

He testified that he went home and called 911, armed himself and returned to the house with his father, but the prowler had vanished.

Travis McMichael testified that his neighbors showed him security videos of a suspicious man seen several times in and around the house under construction near his parents' home. He said it appeared to be the same man he had encountered at the unfinished home.

Sheffield asked Travis McMichael about the events of Feb. 23, 2020, the day Arbery was killed.

He testified that he was inside his parents' home that afternoon when his father, Gregory McMichael rushed in and told him the man Travis McMichael had encountered outside the construction site had just run past their house.

Travis McMichael testified that he grabbed his shotgun and went out to the street, where he saw a neighbor pointing in his direction, apparently signaling the direction the man was running.

He said he and his father got into his white pickup truck and went searching for the man. He said he saw the man who turned out to be Arbery running in front of him and that he pulled up alongside him and recognized him as the same man he encountered at the unfinished home 12 days earlier.

He said he asked his father if he had called the police and mistakenly thought he heard his dad say he had.

Travis McMichael said that when he pulled up to Arbery, he asked, "What are you doing? What's going on?"

He said Arbery did not respond and kept running. He said he caught up to Arbery again and tried to get his attention.

"I'm trying to de-escalate. I knew that this could go any way," Travis McMichael said. "I say, 'Stop for a minute. Please stop.'" 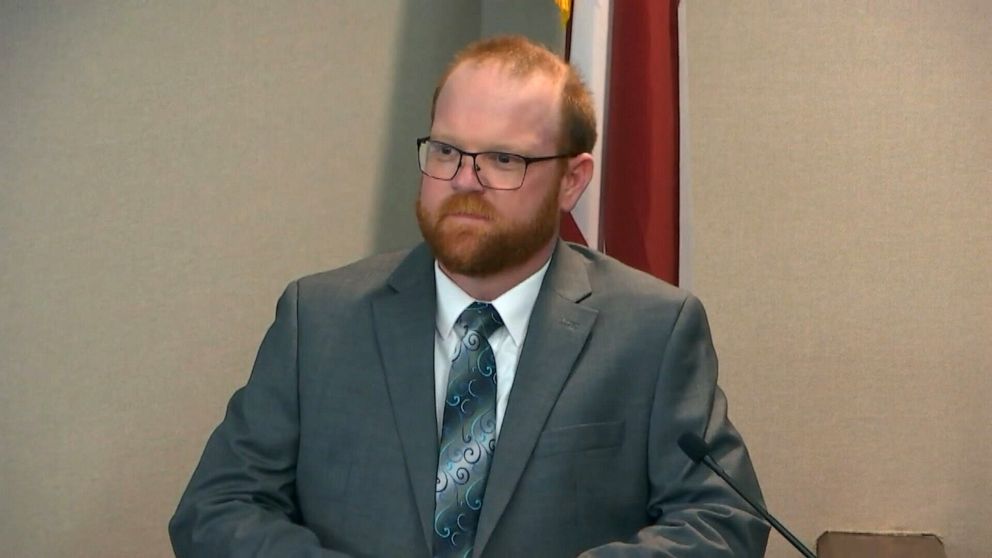 Travis McMichael takes the witness stand in his trial at the Glynn County Courthouse, Nov. 17, 2021, in Brunswick, Georgia.

He said Arbery looked at him with his teeth clenched and his brow furrowed.

"He looked very angry. Mad. It wasn't what I expected at all," he said of Arbery.

Travis McMichael said Arbery turned and began to run the other way.

He said that when he caught up to Arbery again, Arbery briefly stopped as if he was going to speak to him. But Travis McMichael said that when he told him the police were on the way, Arbery bolted. He said that when he stopped, his father got out of the truck and climbed into the pickup's bed so he wouldn't have to sit on a child's car seat that was on the passenger side of his vehicle.

Travis McMichael testified that he never brandished his shotgun at Arbery as he and his father followed Arbery.

He said he continued to circle the neighborhood trying to keep track of Arbery.

Travis McMichael said he turned down a street and saw Arbery running his way and noticed a black truck, driven by Bryan, was following him.

"Mr. Arbery is with the vehicle, he is running with the truck. As we get closer, he's grabbing the truck, looked like he was trying to get in the truck," Travis McMichael testified.

"I didn't know where the truck came from. Mr. Arbery was at the left side of the truck," Travis McMichael testified. "I don't know what's going on with this guy. I don't want to escalate the situation. My thought was why is he attacking a truck? Why is he hitting a truck."

He said he put his running vehicle in park and got out. 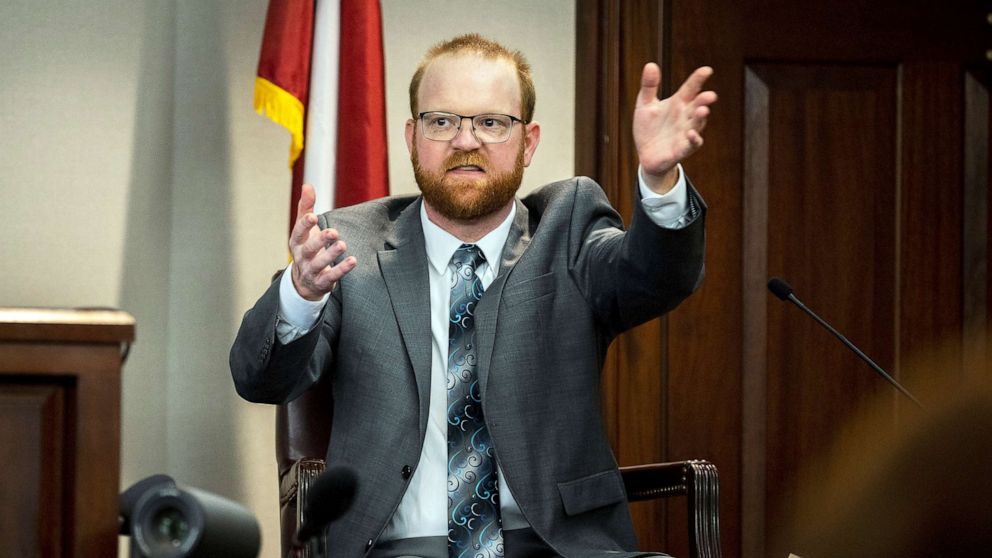 Travis McMichael speaks from the witness stand during his trial in the Glynn County Courthouse in Brunswick, Ga., Nov. 17, 2021. (Stephen B. Morton-Pool/Getty Images)

Travis McMichael said that as Arbery came within 10 feet of the rear of his truck, he yelled at the man to stop. He said he reached into his truck to get his shotgun and that Arbery turned and ran in the opposite direction.

He said he asked his father again if he had called the police and his dad told him that he didn't have his phone.

Travis McMichael said he reached into his truck to get his cellphone and called 911. When he looked up, he said he saw Arbery running back toward his direction at an angle followed by a black pickup truck.

Travis McMichael said that as Arbery ran toward him "like a running back" he gave his cellphone to his father. He said he raised the barrel of his weapon at Arbery, who veered to his right to the passenger side of his truck and that he briefly lost sight of him.

He said he went to the front of his truck thinking that Arbery would just keep running.

"I was going to let him keep running," Travis McMichael said.

But once Arbery reached the front of his truck, Travis McMichael said Arbery turned left and was "on me." He said Arbery grabbed his shotgun.

He testified that during his time in the Coast Guard he was trained and later trained others to do a "pull-push" maneuver when someone grabs your gun.

"So, I push and pull, still getting hit," Travis McMichael testified.

Sheffield asked, "And did you get it free from his grip?"

Travis McMichael responded, "I don't believe I did."

He said that as he and Arbery struggled over the gun he felt he was being overpowered. 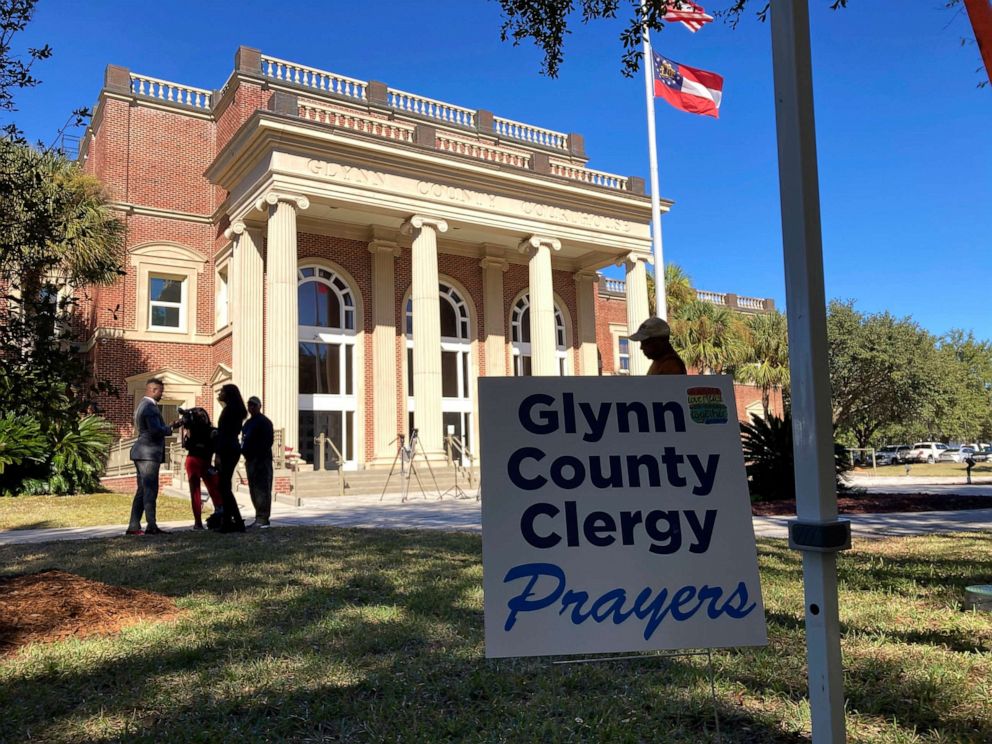 Black and white pastors have set up a tent and are asking for prayers during the trial over the death of Ahmaud Arbery at the Glynn County courthouse in Brunswick, Georgia, Nov. 16, 2021. (Jeffrey Collins/AP)

He said he pulled the trigger, shooting Arbery, but that the man kept fighting with him.

"I shot again because I was still fighting. He was all over me. He was still all over the shotgun," he testified.

"So, I shot again to stop him," Travis McMichael said.

He said that after firing the third shot, Arbery let go of the gun and started to run before he collapsed and died.

"My dad came out and he was yelling that he's got his hand underneath him," he said of Arbery. "I turned around. We got over there and pulled his hand out from under him and realized that he was deceased. And I looked up and the police were right there."

During a cross-examination from prosecutor Linda Dunikoski, Travis McMichael agreed that his shotgun was loaded with seven shotgun shells when he began struggling with Arbery. He also conceded that his weapon's safety was initially on to prevent it from discharging accidentally.

"So, all you had to do is take the safety off and pull the trigger in order to kill someone. Correct?" Dunikoski asked.

Dunikoski briefly questioned Travis McMichael before the judge ended court for the day.