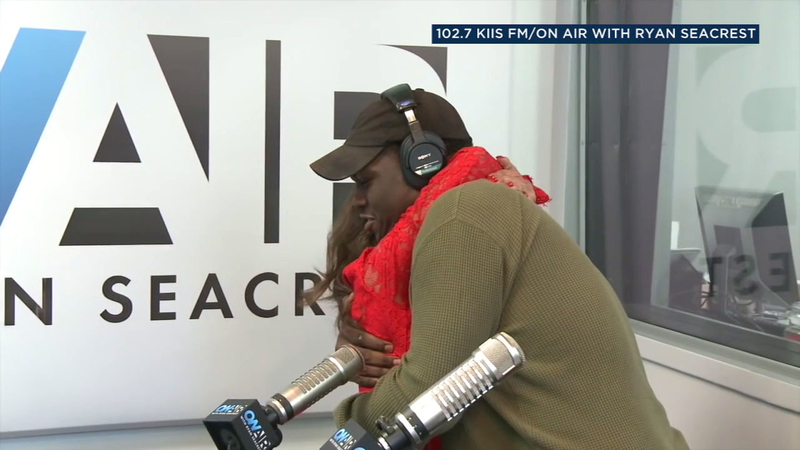 LOS ANGELES (KABC) -- A woman who found a newborn baby buried alive along a hiking trail in Altadena 20 years ago reunited with him on Thursday.

Azita Milanian met Matthew Christian Whitaker during an On Air with Ryan Seacrest segment. Their reunion also happened to be Whitaker's birthday and 20 years to the day that Milanian found him.

On May 16, 1998, Milanian jogged with her dogs on a trail in Altadena when her pets began sniffing around a pile of dirt. After some hesitation, Milanian discovered that it was a newborn baby with his umbilical cord still attached and he'd been buried alive.

Milainian ran for help and came back to get the dirt out of the child's mouth and nose as she waited for an ambulance to arrive. The newborn was then taken to a hospital and Child Protective Services took over. At the hospital, the child was dubbed baby Christian.

He was later adopted and Azita never saw him again. His mother or whomever abandoned him was never found.

Sometime this year, KIIS FM received an email from a woman requesting a 23andMe DNA test for her son's friend, who recently learned he was adopted and wanted to know more about his real family.

It was revealed in the email that the friend was the newborn discovered in Altadena. As KIIS FM staff researched the story, producer Patty Rodriguez wondered if Milanian knew anything about the child she found 20 years ago.

Rodriguez posted the heartwarming story and how it all came about at KIIS FM on her Instagram account.

Milanian said finding the baby changed her life and she created a nonprofit that helps orphan children in his honor.

The two then met during the segment and there were hugs and tears all around.