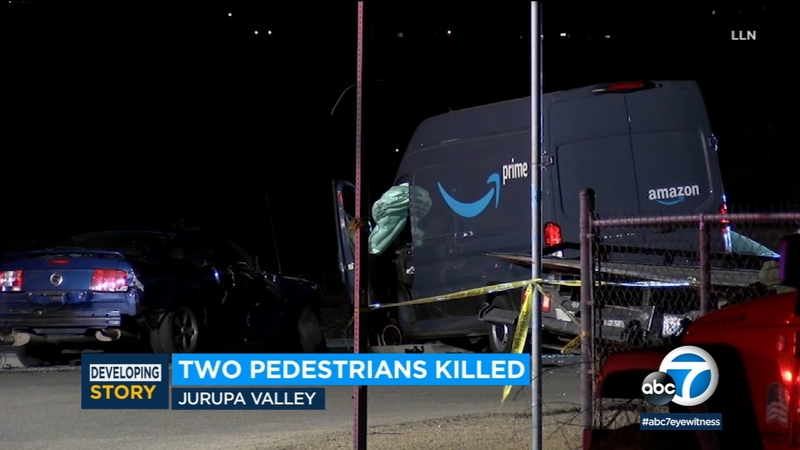 JURUPA VALLEY, Calif. (KABC) -- Two people are dead and two Riverside County sheriff's personnel are in the hospital recovering after an Amazon delivery truck slammed into their sheriff's patrol vehicle that had responded to another accident.

The initial crash took place at 5:54 p.m. Saturday at the intersection of Van Buren Boulevard and 56th Street, according to the California Highway Patrol. That crash investigation was being handled by two members of the Riverside County Sheriff's Department, said CHP Riverside spokesman Juan Quintero.

The Riverside sheriff's personnel included a community service officer and a volunteer, Quintero said. The age and gender of those two victims was not immediately disclosed.

The community service officer used a patrol vehicle to block the No. 1 southbound lane of Van Buren. That patrol vehicle was parked behind the two vehicles involved in the crash.

Around 6:34 p.m., the Amazon Prime delivery truck was headed south on Van Buren when it collided with the unoccupied patrol vehicle, Quintero said. The force of the collision pushed the patrol vehicle into four nearby pedestrians. Two of the people hit were the Riverside sheriff's personnel, who were both taken to a local hospital with major injuries. The CHP said the injured individuals are expected to survive.

The other two people hit were the drivers of the vehicles involved in the first accident, Quintero said. Both of those people suffered major injuries and died at the scene. Their names were withheld pending family notifications.

The driver of the Amazon truck was transported to a hospital complaining of pain. Neither alcohol nor drugs were believed to be factors in the crash, Quintero said.

Correction: An earlier version of the story referred to the injured individuals as deputies.