L.A. City Hall, Union Station, and the U.S. Bank tower are some of the buildings participating.
KABC 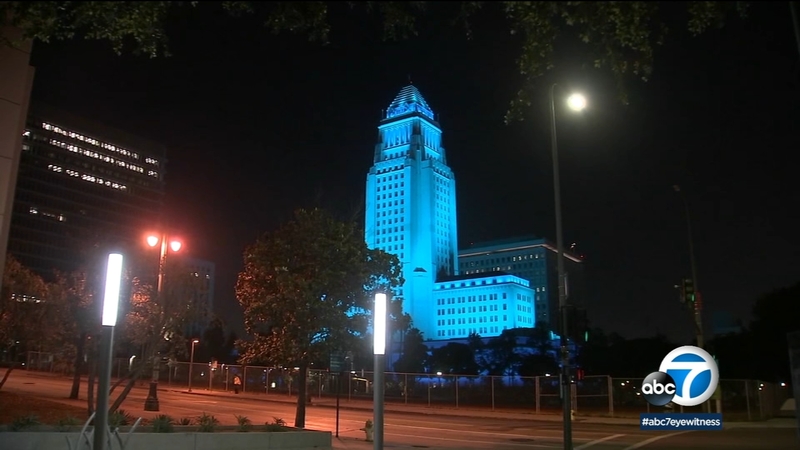 LOS ANGELES (KABC) -- Several buildings and landmarks in the Los Angeles area will be lit up in turquoise lights this week as part of the American Lung Association's LUNG FORCE campaign.

Each year during the second week of May, the organization turns to the country to help spread awareness of lung cancer.

L.A. City Hall, Union Station, and the U.S. Bank tower are some of the buildings participating.

The LAX pylons will turn turquoise tonight as part of the @LungAssociation #TurquoiseTakeover week, uniting the nation to raise critical awareness of lung cancer, the nation’s leading cancer killer. pic.twitter.com/v49i9akY7e

Plus, the Lung Association's L.A. team will be hosting an open house event on May 10 from 5:30 p.m. to 7:30 p.m. at its Mid-City offices to kick off its annual "I Wear Turquoise" campaign.

According to the organization, it's estimated that 17,450 California residents will be diagnosed with lung cancer this year alone.

However, the Lung Association said the percentage of people who are still alive five years after being diagnosed increased by 33% in the past 10 years.

"Raising awareness and funds for lung cancer is more important than ever," said executive director of the American Lung Association in L.A. Frances Mojica. "We encourage our community to get involved in Turquoise Takeover."