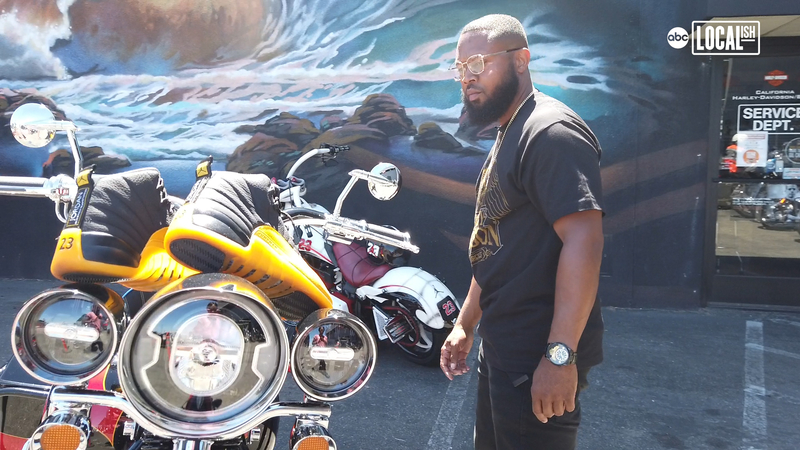 LOS ANGELES -- Motorcycle designer Andrew Thompson has found a way to combine his love of Harley Davidsons with his love of shoes by building a custom Jordan bike.

"My passion for building bikes came from my grandfather. He was building bikes in the early '50s and did it all the way until he passed in 2012," Thompson said.

Thompson said he built his first Harley in high school and he said having that passion steered him in the right direction.

"It kept me out the loop of getting in trouble, me finding my passion for building and designing bikes," Thompson said.

Thompson also deeply cares about his Compton community and the youth. When he's not building bikes, he's organizing community clean-ups.

He said he knows a lot of young people are into tennis shoes and hopes his work will spark some interest in the younger generation.

"It's important because a lot of youngsters they become gang members," said Ms. Showtime, a local motorcycle rider and long-time friend of Thompson. "A lot of the youngsters have laid down their guns and bought a motorcycle. They have seen motorcycles, but they never seen like a Nike motorcycle."

Thompson said his grandfather John McCollum, also known as PeeWee, was recognized as one of Harley Davidson's Iron Elite, which recognizes the contributions of the Black motorcycle community. Thompson said he's hoping one of his own custom bikes can one day earn him that same recognition.

"I want to do something that Harley will be like, 'Man like that's cool,'" said Thompson. "Maybe one day Harley will let me design their anniversary bike."

Thompson said his two Nike and Jordan bikes aren't for sale but he does take custom bike requests and can be reached on his Instagram.