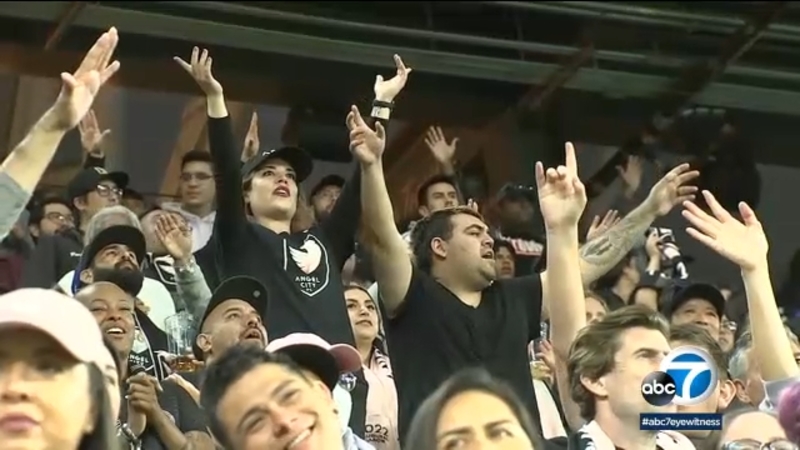 EXPOSITION PARK, LOS ANGELES (KABC) -- On a patch of grass in Exposition Park, with 22,000 people in Banc of California stadium watching a Friday-night soccer match, history was made.

"It's been 13 years, it's been a long time coming," said Emanuel Escamilla, a fan watching from the supporter's section. "It's 2022. We have grown women's football a lot, and it has a strong passion."

The standing-room-only supporters section is similar to that of the men's team whose stadium they share. With a fanbase that typically cultivates from experience and success, both Angel City FC and LAFC have proven they're serious from the start, complete with banners and chants. The team behind the team -- its founders -- cheered alongside.

When asked if it was everything she imagined, president Julie Uhrman responded, "Everything and more."

Angel City won 2-1, only needing three minutes to get on the board.

An MLS vs. Liga MX double-header is set for Inglewood this summer, with the LA Galaxy taking on Chivas and LAFC facing off against Club America in the first ever soccer event at SoFi Stadium.

But the celebration started well before kickoff.

Fan fest welcomed thousands of Angelenos pre-game just outside of the stadium. They had games for kids and a bar for adults. A giveaway tent ran out of hats within the first hour.

"Just to be a part of this first game is huge," said Wellington Andres, from Woodland Hills. "To be part of this inaugural season is awesome."

Another fan, Maria Kennedy, drove in from Diamond Bar.

"This is amazing and to have it happen in my lifetime -- I thought I would be too old for this," she said.

For some, it has been a lifetime since L.A. has seen something like this. Nine-year-old Abby Torres had never had the chance to see women's pro soccer in her hometown, until this match.

"It's a women's team, and I'm a girl," said Torres. "So when I watch them, it inspires me since I play soccer. It just inspires me to do many things."

For L.A., the first Angel City FC match was a win, indeed.

"We took the train here, so you could hear the cheers and the screaming and the joy of the L.A. community for this team," said Veronica Vega.

Angel City FC's next home game is Sunday May 8, against the Orlando Pride.