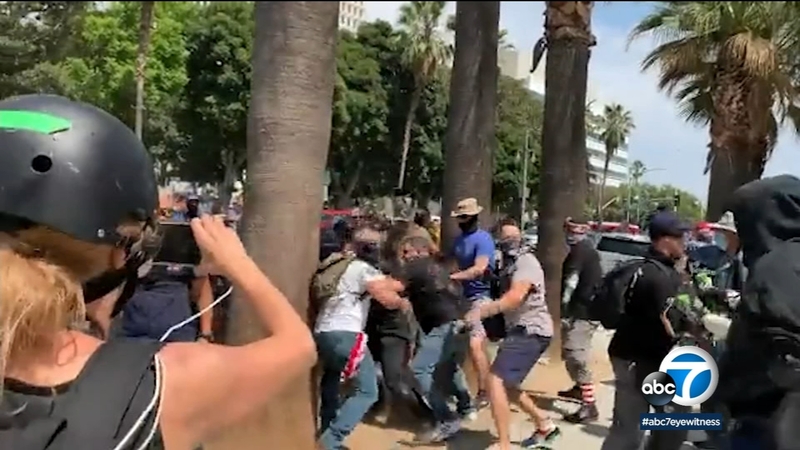 1 stabbed as fight breaks out at vaccine protests in DTLA

DOWNTOWN LOS ANGELES (KABC) -- One person was stabbed and hospitalized in serious condition after a brawl broke out at an anti-vaccine rally in downtown Los Angeles on Saturday.

An anti-vaccine protest as well as a counter-demonstration were scheduled for Saturday afternoon on the south lawn of City Hall.

One was a "Choose Freedom March" to protest the "medical tyranny" of mandatory vaccinations and vaccine passports.

The counter-protest called itself "No Safe Space for Fascists" to demonstrate against what organizers called "violent anti-vaxxers."

Video from the scene shows groups of people brawling at the scene.

It's not clear exactly how the fight broke out or who was involved, but the Los Angeles Police Department says a man was stabbed and was in serious condition.

No suspect was in custody. Police are continuing to investigate.

The rallies came as vaccine mandates continue to proliferate across California.

The Los Angeles City Council voted earlier this week to have the city attorney draw up an ordinance requiring proof of at least partial vaccination to enter many public indoor spaces in the city, including restaurants, bars, gyms, concert venues, movie theaters and even retail establishments.

The Los Angeles County Board of Supervisors is gathering advice from experts over the next two weeks on a similar mandate.

On Friday, interim Superintendent Megan Reilly announced that all Los Angeles Unified School District employees will be required to be fully vaccinated against COVID-19 by Oct. 15. The district previously was mandating only weekly testing for all students and staffers, regardless of vaccination status. That testing requirement will remain in place.

Los Angeles County is requiring its employees to get vaccinated, and many large private employers are doing the same.