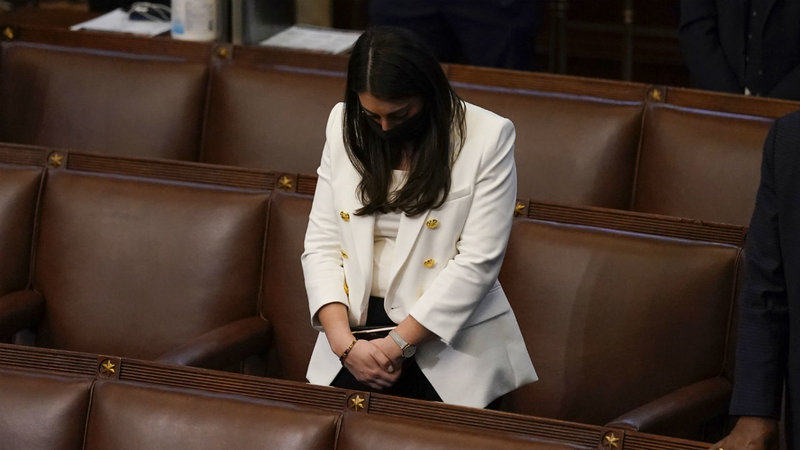 NEW YORK -- New York Rep. Alexandria Ocasio-Cortez is speaking out about her experience when the U.S. Capitol was stormed by rioters on Wednesday.

After White House Press Secretary Kayleigh McEnany made a statement Thursday night, a day after the riots, Ocasio-Cortez said it's shocking that she did not accept responsibility for President Trump's "clear incitement of that crowd."

"He asked them to rush the Capitol and it incited so much of this violence that we saw yesterday that resulted in four deaths and many more injured," she said during an interview with our sister station, WABC-TV.

Calls for President Trump to be removed from office are growing as the exodus from his administration continues.

Ocasio-Cortez is one of many Congressional representatives now calling for President Donald Trump's impeachment if the 25th Amendment is not invoked.

"This is an extremely serious moment and I do believe that we must exercise every avenue possible because what the president has shown is that his mental status and his actions are wildly eroding at a rapid pace and he is becoming increasingly volatile," Ocasio-Cortez said.

She went on to say that every day he is in office represents a clear and present danger to our democracy and Congress.

Ocasio-Cortez said several articles have already been drafted by the judiciary committee and members have already started to sign on to the articles of impeachment.

She explained the key question isn't just the removal of his power, but how.

"There are multiple avenues here, the House can vote on articles of impeachment that can be brought to the Senate and if there are Republican members who understand the clear and present danger, that is one avenue for removal, at the very least it could be an avenue to prevent the president from running for office again," Ocasio-Cortez explained.

She went on to share her experience while inside the halls of the Capitol during the riots. She said it is no exaggeration that she and others were prepared for the possibility of dying during the siege.

"I certainly was thinking that was a possibility and I know many members thought that was a possibility as well, the security breaches are extremely serious and deserve investigations on their own," she said. "I want to be clear that this doesn't start or end at Capitol police but we need to know what happened with the National Guard."

Ocasio-Cortez said she can now sense a real rift from within the Republican party as many were left in shock by the events that unfolded.

So far more than 90 people have been arrested in connection to the events and more arrests are expected as authorities continue to identify suspects.