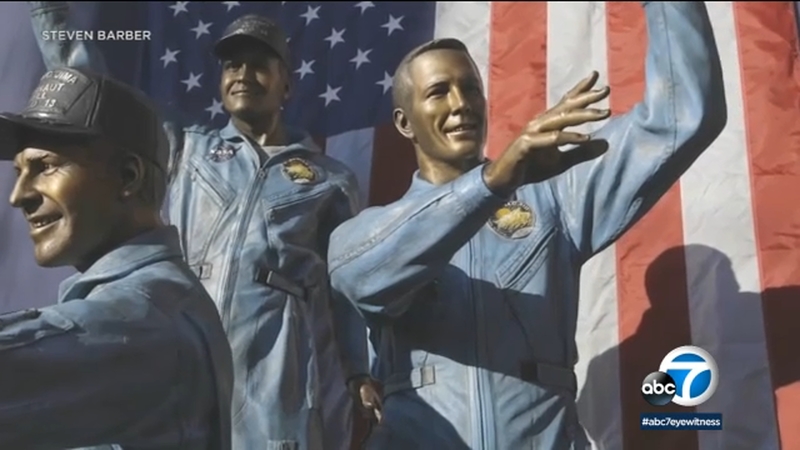 LOS ANGELES (KABC) -- Apollo 13 was the seventh crewed mission in the Apollo space program, and the third meant to land on the moon. Now, Commander Jim Lovell and pilots Jack Swigert and Fred Haise will live on... in clay and bronze.

It's all because of Steven C. Barber, who is on his own kind of mission.

"You know the guys that got on these rockets to go to other worlds, you know the greatest technological achievement in the history of the world," said Barber. "There were no monuments."

Barber is a filmmaker who had his sights set on a documentary about the mission's commander, but the project got tabled. He will tell you Apollo 13 was too legendary to give up on commemorating. Back in 1970, the astronauts who headed to the moon had to abort the mission after an onboard malfunction.

The crew nearly died in space - but this is where the legendary part comes in - after managing to orbit and loop around the moon, the trajectory sent them safely back to Earth.

Barber has a connection to the story; his father worked for General Motors when the company had a NASA contract to build the moon buggy.

Barber raised $750,000 - all during the pandemic, all for this project. For the piece of art, he enlisted two sculptors from Colorado to help.

"I was really living the mantra, failure was not an option," said Barber. "Literally put the deal together for Apollo 13 right before the pandemic hit... thought I was going to lose it."

NASA agreed to place it at the Houston Space Center - permanently. It will be unveiled Saturday, April 17.

And he's already planning his next project: a tribute to Sally Ride.

The helicopter, named Ingenuity, hitched a ride to the red planet with the Perseverance rover, arriving last month. It will be the first powered, controlled flight on another planet.