2 women claim they were tracked with an Apple AirTag in OC: 'It followed our exact location'

Reports show that the tags can also be used to track people unsuspectingly, if slipped into a purse, suitcase or a car.
KABC
By Jessica De Nova 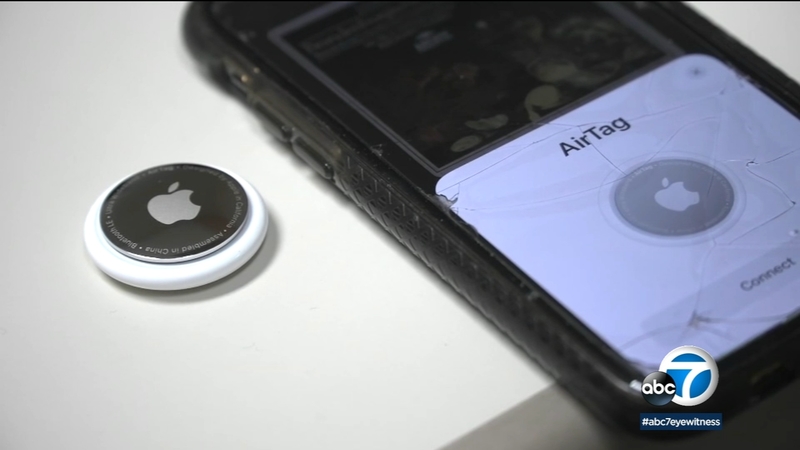 2 women claim they were tracked with an Apple AirTag in Orange Co.

ALISO VIEJO, Calif. (KABC) -- Two women believe they were tracked with an Apple AirTag while they were shopping in south Orange County on Saturday.

Adrianna Ballesteros spoke with Eyewitness News on Tuesday and said she and her friend think the device was used to follow them home.

"I immediately turned around, I was like, 'I'm not going home because we were together the whole night in my car,'" she said. "So I was like, 'If anything, it's probably on my car.'"

The women later searched for the device in their purses, shopping bags and Ballesteros car, but nothing was found.

The button-sized devices can attach to almost anything via a key ring, and iPhone users can use a feature on their phones called "Find My" that allows them to track a tag's location using Bluetooth.

Android users can download the Tracker Detect app from the Google Play store to do the same thing. However, reports show that the tags can also be used to track people unsuspectingly, if slipped into a purse, suitcase or a car, raising questions about privacy and safety.

Swimsuit model Brooks Nader claims someone placed an Apple AirTag in her coat to track her location.

Ballesteros said she dropped her friend off after they went shopping. Twenty minutes later, a notification popped up on her friend's iPhone.

She said it read, "Unknown accessory detected. This item has been moving with you for a while. The owner can see its location."

"Once she clicked the notification, she could pull up, like ... there was a map," said Ballesteros. "It followed our exact location from Target all the way back to her house, so it was a little scary."

"That's when they started searching my car, and then they also actually mentioned that they had gotten a similar call earlier in the day," Ballesteros said.

The friends are not alone.

Sports Illustrated swimsuit model Brooks Nader shared a similar experience on her Instagram account after she said someone slipped an AirTag into her coat.

"I was at a bar in Tribeca ... had my coat like on the chair behind me ... and once I was already on my walk home, halfway home, I got the notification that was like, 'someone is tracking you and has been for a while,'" Nader said.

"AirTag is designed with a set of proactive features to discourage unwanted tracking - a first in the industry - that both inform users if an unknown AirTag might be with them, and deter bad actors from using an AirTag for nefarious purposes."

Ballesteros and her friend said they wanted to share their stories to warn others.

"Be aware of your surroundings. Just be safe," she said.