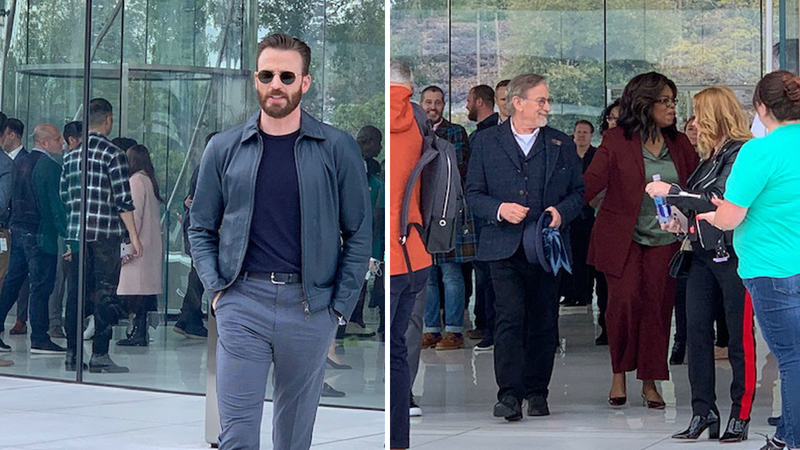 The two companies' headquarters-- Apple in Cupertino and Netflix in Los Gatos-- are only about eight miles from each other.

In the world of online streaming, there is now Apple TV+, Netflix, Amazon Prime, Hulu and coming soon-- Disney Plus, the new streaming service from our parent company. Also, sometime next year, NBC Universal is supposed to jump into the streaming business. All this on top of regular cable.

So, what will Apple offer that the others don't? The message was clear at Apple's headquarters in Cupertino.

The red carpet was missing, but Apple didn't miss the chance to show off its star power. Star power it's using to launch and to attract subscribers to its new AppleTV+ streaming service.

"A new service unlike anything that's been done before," said Apple CEO Tim Cook as he unveiled the new service on the stage of the Steve Jobs Theater.

Producer Steven Spielberg is resurrecting the TV series "Amazing Stories" for Apple, part of a mission to feature great storytelling and programs that inspire.

Apple has even forged a partnership with Oprah to produce documentaries.

"We search for common ground. We want to be heard, but also need to listen," said Oprah.

Apple says the new streaming service launches in the fall. It didn't mention the price. Analysts warn that star power alone won't make it a success against its main competitor, Netflix.

"It will get eyeballs watching the first couple of shows, but like with any TV show, you have to prove that the value is there for people to keep watching," said analyst Bob O'Donnell from Technalysis.

AppleTV+ will serve as a gateway to well over 100 other streaming services. However, it appears to see creative content by passionate storytellers to be its special niche. From creating a pre-school show with Sesame Street characters to assembling Steve Carrell, Reese Witherspoon and Jennifer Aniston for a program about a morning TV show.

"Honestly you can't have an honest look at complex relationships between men and women with just women," said Jennifer Aniston.

Steve Carrell replied, "Well, I am just happy to provide the manliness."

AppleTV+ will be available across all Apple devices and a number of advanced TV sets, but not on Android devices. That could limit its audience, or give those owners a reason to switch.