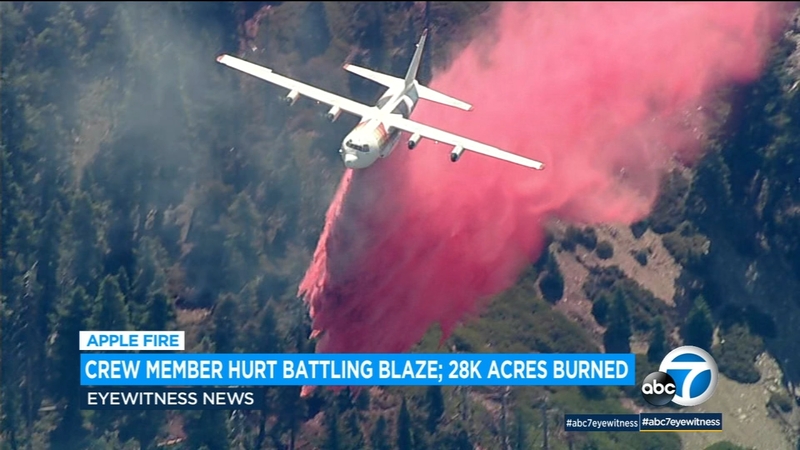 An evacuation warning was issued for the Morongo Valley community on Thursday as the massive Apple Fire remained 30% contained, the San Bernardino County Sheriff's Department said.

"There is a potential threat to life and/or property," the Sheriff's Department said. "Those who require additional time to evacuate, and those with pets and livestock should leave now."

Highway 62 was suggested as an evacuation route in either direction.
EMBED More News Videos

The massive Apple Fire in Riverside County was started by a vehicle's mechanical malfunction, investigators have determined.

The Apple Fire has charred 28,085 acres and destroyed four homes since Friday.

A firefighter was injured Thursday when a tree fell, striking his head. He was treated and the injury was considered minor.

A dog who was rescued by firefighters in the burn area of the Apple Fire in Riverside County has been reunited with his owner.

Fire officials estimate the blaze could be fully contained as soon as Aug. 17, according to Kate Kramer of the U.S. Forest Service.

Officials estimated that 2,600 residences and 7,800 people have been evacuated since the blaze erupted in Cherry Valley about 5 p.m. Friday in the area of Apple Tree Lane and Oak Glen Road.