Get complete coverage of the trial of Michael Jackson's doctor, Dr. Conrad Murray, who is charged with involuntary manslaughter.

The recording was extracted by DEA agent Stephen Marx from Murray's iPhone, which was seized by police shortly after the singer's death.

The singer was heard talking briefly about not having a childhood. While most of the recording was incoherent, Jackson was heard saying it was important he perform to help children around the world.

"My performance will be up there helping my children and always be my dream. I love them. I love them because I didn't have a childhood ... I feel their pain. I feel their hurt. I can deal with it," Jackson says in the recording.

Follow @abc7MurrayTrial on Twitter to get the latest updates on the involuntary manslaughter trial of Dr. Conrad Murray.

The recording ends with Murray asking Jackson if he is OK.

"I am asleep," Jackson responds.

Murray's defense team has told Eyewitness News that the audio is evidence of Jackson self medicating.

Medical experts have already testified that propofol would not cause the slurred speech, but defense attorneys did not offer an explanation as to why Murray made the recording.

Marx testified Murray was checking emails on his phone in the hours before Jackson's death, assuring promoters that Jackson was ready for what would have been a grueling performance schedule.

The emails showed that officials from promoter AEG knew that Murray was treating Jackson for a variety of ailments, anything from anxiety to insomnia.

A company needed to insure the concert tour and requested Jackson's medical history, especially with media reports citing problems with pain medications, but Murray told the insurance company that all reports about Jackson's ill health were false.

Marx also recovered a voicemail on Murray's iPhone from Jackson's manager Frank DiLeo, who was worried about the singer's health.

"I'm sure you're aware he had an episode last night. He's sick. I think you need to get a blood test on him. We got to see what he's doing," DiLeo said.

Photos of Jackson's bedroom painted a picture of a sick man: medical equipment, an IV stand, an assortment of anti-anxiety meds and a dozen bottles of propofol.

Deputy District Attorney David Walgren presented evidence in a painstaking and deliberate way, itemizing all the evidence that was seized from Jackson's bedroom. By the end of the presentation, 37 bottles of propofol and other medications lined the table in front of the jury.

Earlier in the morning, jurors heard from a medical supplies company official, who spoke about all the equipment Murray had ordered for Jackson the months before his death. It included blood pressure cuffs, IV pumps and catheters.

Sally Hirschberg of Seacoast Medical Supply company testified that red flags were raised when Murray tried to have equipment shipped to a residential address, so they did not send the shipment.

In the days ahead, jurors will hear Murray's two-hour LAPD interview two days after Jackson's death. It will be the first time the jury hears from Murray himself.

Murray is on trial for involuntary manslaughter for Jackson's sudden death on June 25, 2009, at the age of 50. Prosecutors allege Murray tried to hide the fact that he had been giving propofol to Jackson.

Murray, 58, has pleaded not guilty and has denied any wrongdoing. If convicted, he could face up to four years in prison and lose his medical license.

The trial is expected to last five weeks, with Oct. 28 being the estimated last day.

View photos from the involuntary manslaughter trial of Conrad Murray. 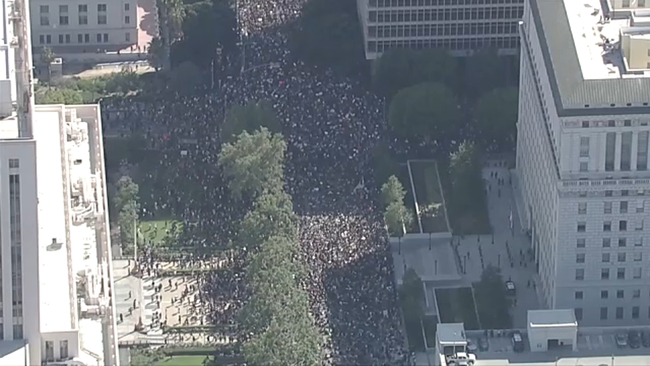