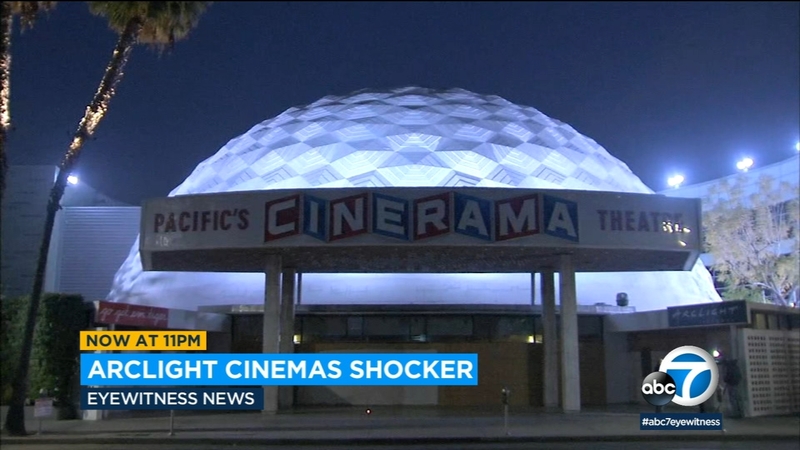 "After shutting our doors more than a year ago, today we must share the difficult and sad news that Pacific will not be reopening its ArcLight Cinemas and Pacific Theatres locations," the company said in a statement. "This was not the outcome anyone wanted, but despite a huge effort that exhausted all potential options, the company does not have a viable way forward."

Among the popular movie theaters that will close include the iconic Cinerama Dome on Sunset Boulevard in Hollywood, which has not only been a popular host of movie premieres, but has also played a prominent role in films, most recently making a cameo in "Once Upon A Time In Hollywood."

Following a temporary closure due to the coronavirus pandemic, Hollywood's El Capitan Theatre welcomed back moviegoers with a showing of Disney's "Raya and the Last Dragon."

"To all the Pacific and ArcLight employees who have devoted their professional lives to making our theaters the very best places in the world to see movies: we are grateful for your service and your dedication to our customers," the company's statement added. "To our guests and members of the film industry who have made going to the movies such a magical experience over the years: our deepest thanks. It has been an honor and a pleasure to serve you."

The group is the latest in a string of companies closing its doors due to the coronavirus pandemic. The pandemic has dealt a huge blow to movie theaters across the country, with many struggling to stay afloat.

Arclight Cinemas and Pacific Theatres have been boarded up for months because of COVID-19. Now, the parent company to the chains is closing down hundreds of screens across the state. Fans and Hollywood stars are mourning the news.

"This is a Hollywood landmark that has been here since I was a child," said Michael O'Malley of Los Angeles. "I've seen so many movies here at the Cinerama Dome. I'm surprised there isn't some push to keep it alive."

ArcLight Cinemas created a high-end experience for viewers, which sometimes included people who made the films.

The announcement comes just as California is starting to turn the corner and the economy is opening back up.

In L.A. County, which is in the orange tier, movie theaters are allowed to be open at half capacity.

Industry insiders believe this isn't the end of the road for the theaters, and there may be other players who could come in to save some of the locations.

As for the Cinerama Dome, it was declared a Los Angeles Historic-Cultural Monument. That doesn't mean it can't be torn down, but there is a commission that protects the building and plans will have to go through the commission if any changes are made.