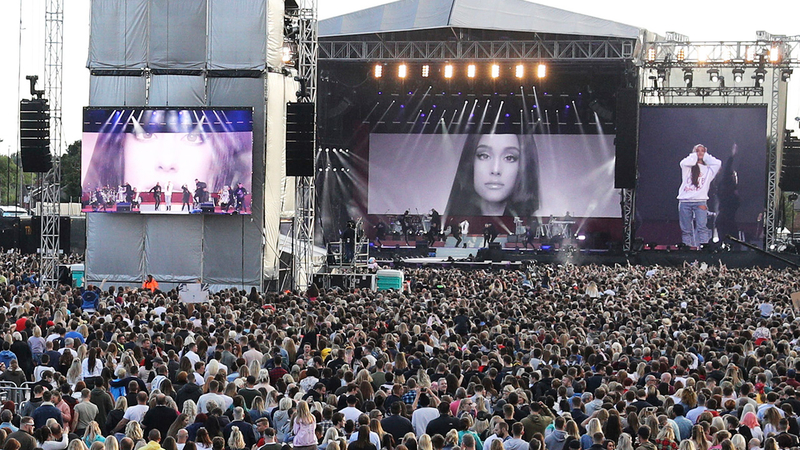 MANCHESTER, England -- Ariana Grande paid tribute to the city of Manchester, England, on Sunday with an energetic, all-star concert that raised millions for victims of a suicide bombing that tore through her last performance in the city nearly two weeks ago.

Grande was emotional and teary-eyed throughout the One Love Manchester concert Sunday, which the British Red Cross said it raised more than 10 million ($13 million) for the We Love Manchester Emergency Fund, created for those affected by the attack at Grande's May 22 show.

She closed the three-hour-plus event with a cover of "Over the Rainbow," crying onstage at the song's end as the audience cheered her on.

"Manchester, I love you with all of my heart," Grande said before the performance, and just after singing "One Last Time" with Miley Cyrus, Pharrell and more of the show's performers standing behind her in solidarity.

Grande enlisted some of music's biggest names for the benefit concert, including Justin Bieber, Katy Perry and Liam Gallagher.

Gallagher, formerly of Oasis, earned loud cheers from the audience as he emerged in his home town in surprise form. He sang and offered encouraging words to the crowd, who held inspirational signs in their hands.

One of the most powerful moments was when the Parrs Wood High School Choir performed Grande's "My Everything" with the singer. The 23-year-old pop star held the young lead performer's hand, both with tears in their eyes, as the rest of the singers joined in.

Perry also left a mark with her resilient performance: She sang a stripped down version of her hit, "Part of Me." Backed by two singers and a guitarist, she delivered the song wearing all white, singing, "Throw your sticks and your stones, throw your bombs and your blows, but you're not gonna break my soul."

"I encourage you to choose love even when it's difficult. Let no one take that away from you," she said.

Bieber shared similar words onstage, even coming close to crying when he spoke about God and those who died at Grande's show.

"(God) loves you and he's here for you. I wanna take this moment to honor the people that were lost, that were taken," he said. "To the families, we love you so much. ... Everybody say, 'We honor you, and we love you.'"

Coldplay were also a crowd favorite, performing well-known songs like "Viva La Vida" and "Fix You."

Grande performed throughout the show, singing her hits from "Side to Side" to "Break Free." She even collaborated with others onstage: She sang Fergie's verse on the Black Eyed Peas hit, "Where Is the Love?" along with the group; she performed a duet with Cyrus; and she sang her debut song, "The Way," with rapper Mac Miller.

Cyrus said she was "so honored to be at this incredible event" and performed "Happy" alongside Pharrell, who also sang "Get Lucky."

"I don't feel or smell or hear or see any fear in this building. All we feel here tonight is love, resilience, positivity," Williams said.

Take That, who are from Manchester, followed with fun energy that the crowd danced to.

"Our thoughts are with everyone who has been affected by this," singer Gary Barlow said. "We want everyone to stand strong."

Robbie Williams also performed, changing some of his lyrics of "Strong" to honor the Manchester victims.

The Manchester concert came the day after attackers targeted the heart of London, killing seven people. Authorities have said the attack started with a van plowing into pedestrians and then involved three men using large knives to attack people in bars and restaurants at a nearby market.