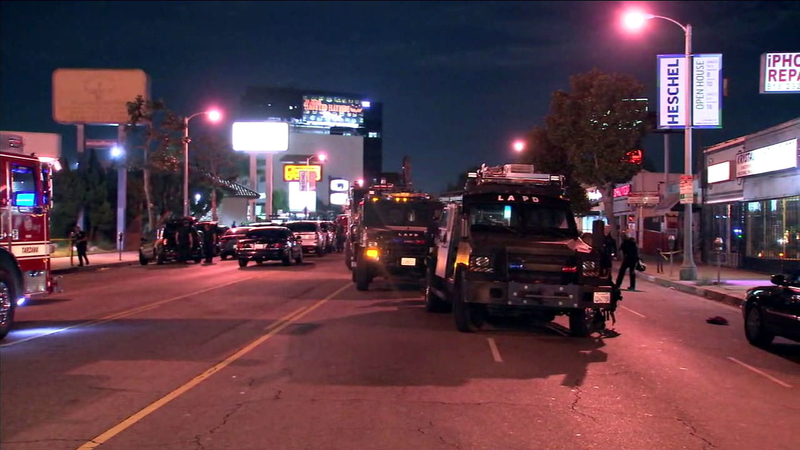 TARZANA, LOS ANGELES (KABC) -- An hours-long standoff - reported as armed robbery suspects barricaded with a hostage at a Tarzana marijuana dispensary - ended as police entered the location and found no one inside.

The incident began at 1:37 p.m. with a report of an armed robbery in the 18300 block of Ventura Boulevard. When officers arrived, they were told the suspects were still inside the building.

Police believed four suspects, potentially armed, were inside the building, possibly with a female hostage. The suspects were allegedly trying to rob a marijuana dispensary in the back of the strip mall.

"We don't believe that there was a hostage situation inside," Sgt. Hector Guzman said. "Was she a victim? Was she a witness? Was she a suspect?"

Officers cordoned off the area, evacuated nearby businesses and warned the public to stay clear.

"It's very dangerous. When I heard about this, I was shocked. I told my brother, stay home. Do not come out," Jonathan Yacobi said.
But by around 9 p.m. police said SWAT officers had entered the building and found nobody inside.

For now, police believe there are four suspects on the loose.

Authorities said they will review surveillance video from surrounding businesses.

At one point during the standoff, a man was detained, but it is not clear to what extent, if any, he was involved in the incident.