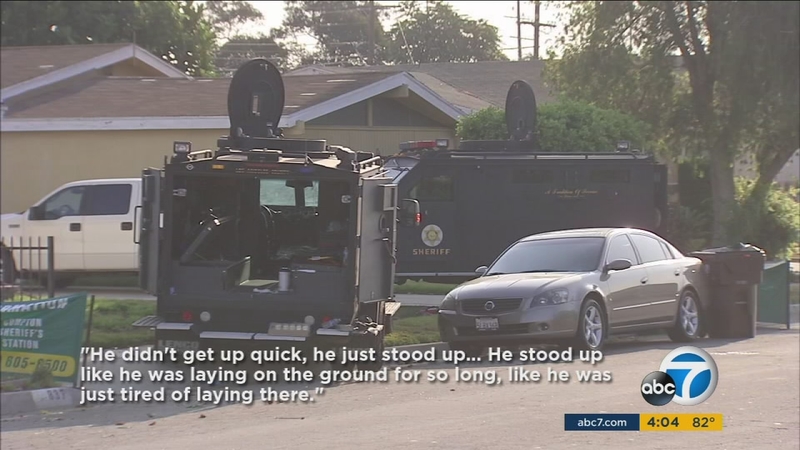 Deputies shoot, kill man amid search for suspect who fired at them in Compton

COMPTON, Calif. (KABC) -- Los Angeles County sheriff's deputies shot and killed a man Thursday as they searched for a suspect they say fired at them after a pursuit in Compton.

Investigators are still trying to determine if the man who was shot was involved in the original incident or had been armed at all. Another man was taken into custody without injury.

The incident started around 2:03 a.m., when deputies attempted to stop a car for a traffic violation near 138th Street and Alameda Avenue.

The driver in the vehicle refused to pull over and fled from deputies, prompting a chase. During the pursuit, deputies discovered that the car had been stolen in an armed carjacking earlier in the morning.

The chase ended when the car crashed near Slater and Compton avenues. The suspect then got out of the car and began firing shots at the deputies, authorities said. The deputies fired back and the suspect ran into an adjacent neighborhood.

Authorities said no deputies were hit, and it was unclear if the suspect was shot at the time.

Several blocks in the area were cordoned off as deputies searched for the suspect, who was considered armed and dangerous.

During the search, authorities said an armed man approached a home in the area and told residents on the porch that he was going into their backyard, and if they followed, he would shoot. This suspect was found hiding in that home by deputies and taken into custody.

No shots were fired, and the residents were not hurt.

At the same time that was happening, SWAT officers spotted another man, believed to be matching the description of one of the suspects, in the driveway of a home in the 800 block of West Stockwell Street.

Officers later said the man charged at them before they fatally shot him.

One witness told ABC7 the SWAT officers had the man on the ground for 20 minutes before any commands were given.

"'You in the Kobe Bryant jersey, raise your hand up,'" the witness reported hearing the officers tell the man. "Evidently the guy didn't respond because they kept on repeating it."

The witness, however, said he did not see the man charge at the officers. He said it appeared more like he decided to stand up after being on the ground for some time. He also said he did not hear the suspect say anything, nor raise his hands or show a weapon.