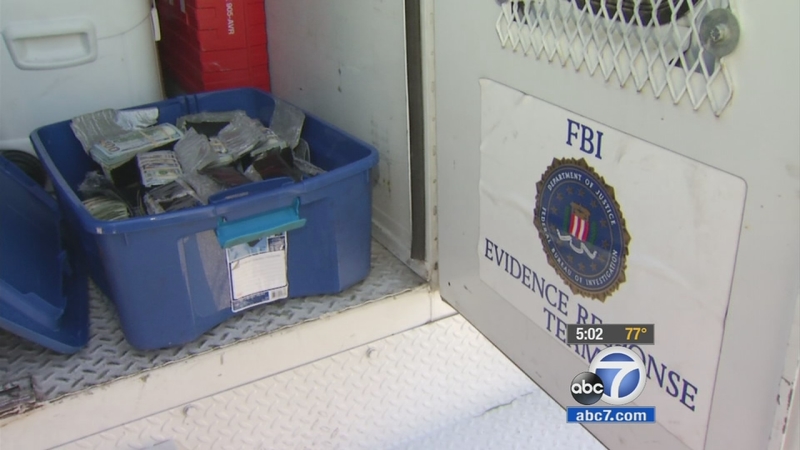 Half a million found buried in backyard of Fontana home

FONTANA, Calif. (KABC) -- More than a year after more than $1 million was stolen in an armored car heist, some of that money was found buried in the backyard of a Fontana home Wednesday morning.

About $600,000 was found at a Fontana home off Marcona Avenue. Several undercover federal agents showed up at the home and began collecting a plastic bin and trash bag full of cash.

All the agents would say is that they received a tip from an informant regarding the location of the money.

Cesar Yanez, 37, of Fontana, and Aldo Esquivel Vega, 28, of Pomona, were the two men accused of stealing the money. One of the men is also the owner of the Fontana home where some of the money was found.

Agents also issued search warrants and found $85,000 in cash at Yanez's home at the time of their arrest. About $300,000 is still missing from the heist.

A third person involved in the scheme, Jovita Medina Guzman, 39, of San Bernardino, was also arrested on suspicion of helping the men hide and disperse stolen funds as well as being an accessory to the crime.

An indictment issued for the trio claimed Yanez and Vega, who were employed by Loomis Armored U.S., transported a multi-million dollar shipment of cash to Bank of American on June 27, 2014.

The two were suspected of stopping the armored truck in a parking lot on West Adams Boulevard. Vega then electronically opened the rear doors and placed $1,086,000 into a trash can that had been left in the parking lot by another person, who later returned to recover the stolen money.

Guzman was suspected of then delivering some of the stolen money to Vega.

During trial last year, Yanez pleaded guilty to larceny and conspiracy and was sentenced to nearly five years in federal prison.