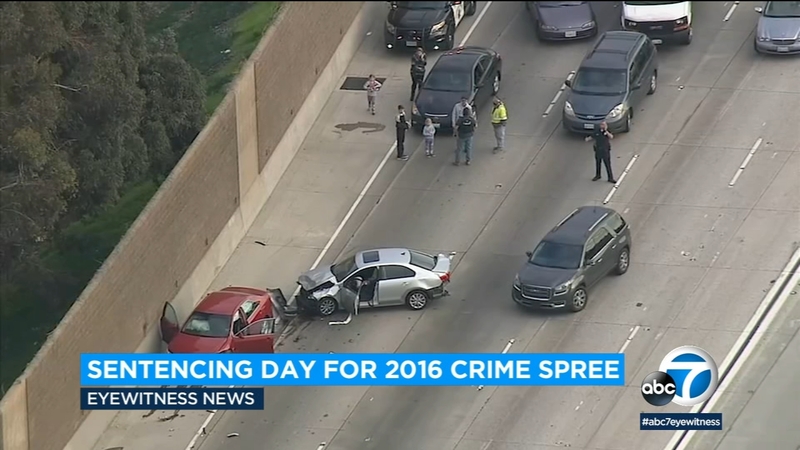 LOS ANGELES (KABC) -- A Los Angeles court judge sentenced 38-year-old Artyom Gasparyan on Tuesday to life in prison with no possibility of parole for a violent crime spree, and a freeway crash that resulted in a woman and her children being hurt.

In August, a jury convicted Gasparyan on over 30 counts for the violent crime spree which ended with him being shot after a wrong-way freeway crash.

It was a violent and bloody end to a wild and speedy pursuit on the 5 Freeway roughly six years ago. Police closed in on Gasparyan, who detectives say was armed following a wrong-way crash on the freeway near Sylmar. Police shot him as he attempted to exit his car and flee the scene.

Gasparyan stood trial for murder, attempted murder, and a host of other violent crimes including carjackings during a crime spree that terrorized southland neighborhoods.

"Mr. Gasparyan did everything he could to kill well over a dozen people," prosecutors said at the sentencing hearing Tuesday.

In 2015, Gasparyan shot and wounded one man and opened fire on a second man, killing Adan Corea in Panorama City.

"Mr. Gasparyan is one of the most dangerous people to ever walk the streets of Los Angeles County. Complete disregard for the lives of so many innocent people," prosecutors said. "When it comes to the life of Adan Corea, he took his life, but if you look at the shooting of Barry...who is an elderly man...it's a small miracle that he survived. He testified...he went through 28 different procedures surgeries, multiple surgeries."

Before handing down Gasparyan's fate, the judge asked for witness impact statements.

"People, do you have any victim impact statements at all," the judge said.

"There will be no victim impact statements made today although we do have the sister of the deceased in court," replied prosecutors.

With that, the judge sentenced Gasparyan.