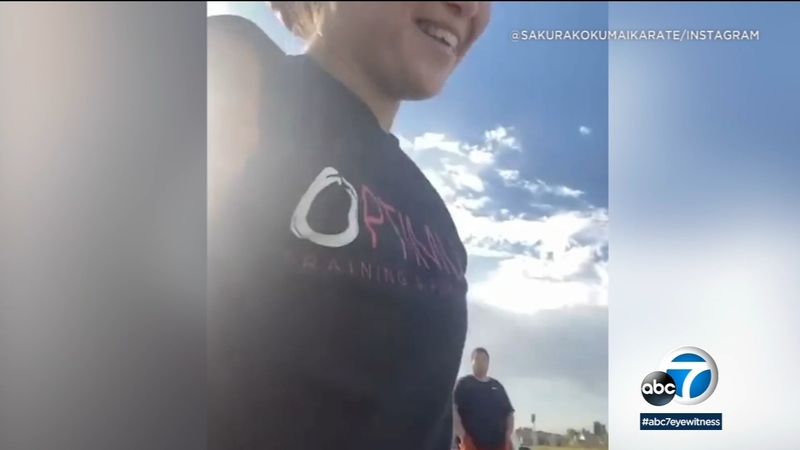 In the latest in a disturbing spike in anti-Asian attacks, an Olympic hopeful from Orange County was in a park training for the summer games when a man targeted her in an incident that she captured on video.

"I was shocked... I didn't know what to do.. and it slowly escalated in a way where he got close to me and he continued to yell at me for no reason," Sakura Kokumai, a Team USA Karate Olympian, told ABC7 in an interview.

"There was no racial slurs at the beginning," Kokumai said, "but as he got into his car he would yell out 'Chinese' and 'Sashimi' and then I was like OK there it is."

Sakura Kokumai says she was working out at Grijalva Park - just like she does every day as she prepares for the Olympics. She's set to represent the U.S. in the Tokyo games this summer -- as the first American to qualify for the Olympic games in karate.

It's why she says she was so calm: she knew if she had to, she could fight back. She said the man out of nowhere started harassing her for nearly 20 minutes.

"You know what? If this was my mom... what if this was my grandma...that's where it got scary, because I knew that I was able to handle myself with the situation by being calm," Kokumai said. "You don't want to be aggressive. But my worry was, what if this was somebody else?"

In 2020, there were 10 times as many hate incidents and crimes against Asian Americans in Orange County. A majority of those crimes were in public, according to the Orange County Human Relations Commission.

Just last month, an 82-year-old Asian American woman at the Leisure World retirement community in Seal Beach received a letter on the day of her husband's funeral -- it said his death was a good thing because it meant "one less Asian to put up with."