The material was later identified as RenInfusion 8610.
KABC
By Tony Cabrera 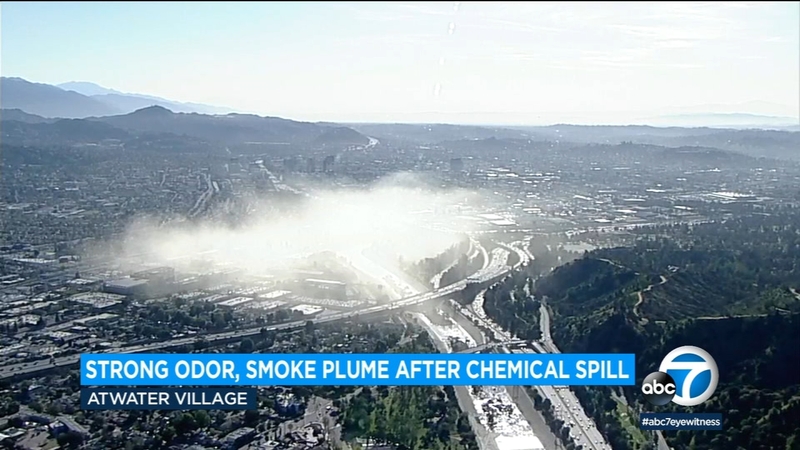 ATWATER VILLAGE, LOS ANGELES (KABC) -- A hazardous materials incident Thursday morning at an industrial facility sent a massive, pungent cloud into the air above Atwater Village and prompted a response from firefighter-paramedics.

Although the incident was initially reported around 8:30 a.m. as an "automatic fire alarm" at Huntsman Chemical in the 4500 block of West Electronics Place, no fire or explosion occurred, according to the Los Angeles Fire Department.

A large metal vessel was being prepared for packaging/distribution and a small valve broke, expelling gas into the air, the Fire Department said in a statement. The material was later identified as RenInfusion 8610.

According to a statement issued by Huntsman Chemical, there was limited product involved and no injuries were reported.

The building where chemical spill occurred was evacuated as a precaution, the LAFD said.

The Fire Department urged members of the public in the immediate area to shelter in place, closing doors and windows. Those who chose to evacuate were advised to travel south of Electronics Place.

Hazmat firefighters entered the building with specialized gas meters and determined "there is no current threat -- there were no readings of concern on the meters," said a news release issued at 10:30 a.m.

"We have to take these situations with an abundance of precaution until we identify the products we're dealing with," LAFD Capt. Erik Scott told ABC7 at the scene. "We made sure everyone remained upwind of that area until we made sure that there was nothing of harm."

The cause of the valve rupture was under investigation.