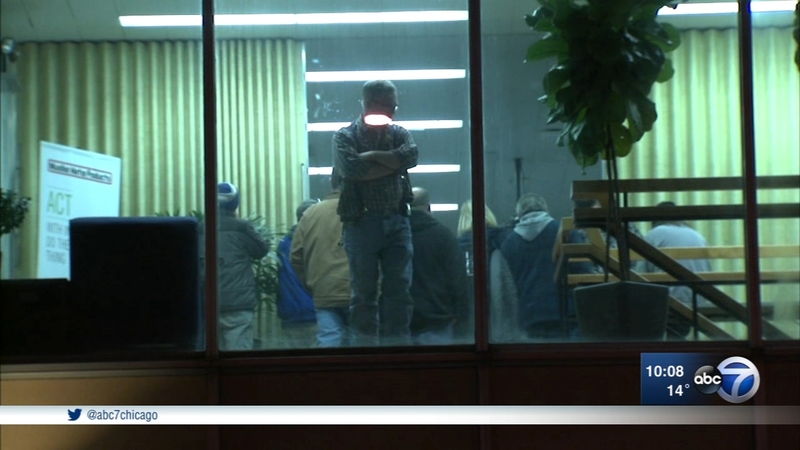 AURORA, Ill. -- Five people are dead, five City of Aurora police officers were shot, and at least six others were injured in a workplace mass shooting in west suburban Aurora Friday afternoon. The gunman is also dead, police said.

Aurora police said officers first responded to the Henry Pratt Company in the 400-block of South Highland Avenue just before 1:30 p.m. Police said two of the four first officers on the scene were fired upon immediately. More officers arrived as backup and were also fired upon.

ATF and FBI agents responded to the scene at approximately 2:37 p.m.

The Aurora Police Chief spoke about Friday's mass shooting at a press conference.

Police said the officers engaged Martin in gunfire and he was killed. It was not immediately clear if Martin was killed by a police bullet or his own gun.

Governor JB Pritzker spoke at a press conference on a mass shooting in Aurora.

"There are no words for the kind of evil that robs our neighbors of their hopes, their dreams, their futures," said Governor JB Pritzker, who also attended the press briefing.

"Our hearts go out to the victims in this horrific tragedy. Our prayers to their families during what I'm sure will be a long and painful healing process. But we will heal. We will come together as one community and stand by those in pain from today's great loss. We will stand together with those officers shot in the line of duty. We will come together and heal as One Aurora," said Aurora Mayor Richard Irvin.

Martin was a veteran assemblyman at the century-old valve plant. Law enforcement sources told the ABC7 I-Team he was summoned to a meeting room where he was told he was being fired. He responded with a pistol, opening fire on the executives in the room, and then took his anger to the plant floor where dozens of his coworkers were still on the lines.

Investigators are combing the apartment of gunman Gary Martin, after he killed 5 people and injured at least 11 more, including 5 police officers, in a workplace shooting.

"Next thing you know, he went walking back in front and we heard more shots and that's when we just left the building, and he started opening up on the room and he was just shooting everybody," said John Probst, witness and survivor, who has worked at the plant for 40 years.

John Probst, who works at Henry Pratt Company, describes the shooting at his workplace in Aurora and how he escaped.

There would have been approximately 30 people in the building at the time of the shooting, Probst said.

Police said in addition to the five people killed, only one other person was shot. A total of six people were taken to area hospitals for treatment with non-life threatening injuries, some of which may have been sustained as they tried to escape the shooter.

The I-Team has learned that Martin has a criminal background, and that he was convicted in 1995 for aggravated assault, a felony, in Mississippi and served two and a half years in the Mississippi Department of Corrections. It was not immediately known if he had a criminal record in Illinois.

There was a large law enforcement presence at Martin's apartment as investigators try to determine his motive and whether any part of this attack may have been planned. SWAT teams and a bomb squad swarmed the parking lot of the otherwise nondescript apartment complex.

"You never know who you're living with," said Patrick, a neighbor.

Technicians worked with a robot, sending it into the gunman's apartment to look for anything, perhaps hazardous, that might give them a clue as to what led up to the shooting.

Investigators are trying to piece together a clearer picture of who Martin is.

"He didn't seem odd," Patrick said. "He kind of kept to himself. Never really saw him with anybody. Just kind of strange."

With tears running down her face, Spears described Martin - who she called Ted - as a kind, old friend.

"Just in school, we hung out in school. Knowing him, he left town and came back, but he ain't no bad person," she said.

While investigators search his belonging and electronics for clues, Spears offered a little insight.

"People are tired, depressed, so much going on. I wish the city of Aurora had something for people with mental health," she said.

Employees at Henry Pratt were kept on lockdown in another building well into the evening, but were allowed to leave around 8 p.m. after every corner of the facility was deemed secure by heavily-armed SWAT teams and K-9 units.

When they left, some carried their lunch cooler like any other day, and another employee carried Valentine's Day roses and a "happy birthday" gift bag.

Mueller Water Products is shocked and deeply saddened by the horrific tragedy that occurred today at our Henry Pratt facility in Aurora, Illinois. Our hearts are with the victims and their loved ones, the first responders, the Aurora community and the entire Mueller family during this extremely difficult time. Our entire focus is on the health and wellbeing of our colleagues, and we are committed to providing any and all support to them and their families. We continue to work closely with law enforcement, with whom we share our deepest gratitude for their support. We will provide updates as we learn more.

The Henry Pratt Company is located amongst residences in Aurora, and the people who live near the plant were shaken by Friday's mass shooting.

The sound of gunfire and police sires had neighbors too scared to go outside of their homes for most of the afternoon.

"It sounded like a machine gun," said a neighbor named Maria.

Residents were told to stay away from the active scene.

"Me and my husband were coming back from the store and I saw the first squad car pull up and then there were hundreds just going through my street. And I told my husband, I said, we have to go on lockdown," said Margie, neighbor.

West Aurora Schools were on soft lockdown for several hours. The lockdown was lifted at about 3:30 p.m. and students were dismissed. Parents tried to locate their children at different dismissal points.

"They didn't tell us anything," she said. "They just said that it was not a drill and that we couldn't leave."

The community is thankful for the first responders and heartbroken over the loss of the innocent victims.

Probst said he and a coworker escaped through the back door. Probst said a nearby resident allowed Probst and his coworker to shelter in his home.

'They had no coats on, so I let them in": Homeowner describes giving shelter to active shooting survivors
EMBED More News Videos

Homeowner Gabriel lives behind the scene of the shooting in Aurora and describes how and why he let several survivors into his home after they escaped.

My heart breaks for Aurora. I'm tracking updates on the situation with my staff. Thank you to the members of law enforcement who are responding to the emergency.

Great job by law enforcement in Aurora, Illinois. Heartfelt condolences to all of the victims and their families. America is with you!

The Illinois Fraternal Order of Police said in a statement released Friday:

"Every police officer dreads days like this one, yet these four courageous Aurora officers and their colleagues did not hesitate to literally put their lives on the line today to stop further bloodshed. These four heroes willingly ran into harm's way to protect their fellow citizens and very nearly paid the ultimate price. We Illinoisans should be humbly grateful for their sacrifice, and we ask that you join us in praying that the injured civilians and police officers make a full and speedy recovery."
Report a correction or typo
Related topics:
auroraofficer injuredmass shootingshooting
Copyright © 2022 WLS-TV. All Rights Reserved.
TOP STORIES
Gunman shot wounded man in head while victim was on phone with 911
Man who sparked probe into Kobe Bryant crash photos speaks out
Free N95 masks arriving at pharmacies as early as Thursday
LAPD to cover funeral expenses for off-duty officer killed, chief says
Kaiser to be sued after mom of 3 denied COVID shot dies, lawyer says
Inmate walks way from reentry program in LA, prompting search
Toddler credited with saving family of 7 from devastating house fire
Show More
Riverside congressman introduces 4-day work week legislation
Oscar Mayer hot dogs and Velveeta cheese will get more expensive
Biden confirms he will nominate first Black woman to SCOTUS
Portola HS principal condemns racist taunts hurled at basketballer
Shooting on 5 Freeway in Sylmar leaves driver wounded
More TOP STORIES News